Jeffrey Gibson: Because Once You Enter My House, It Becomes Our House 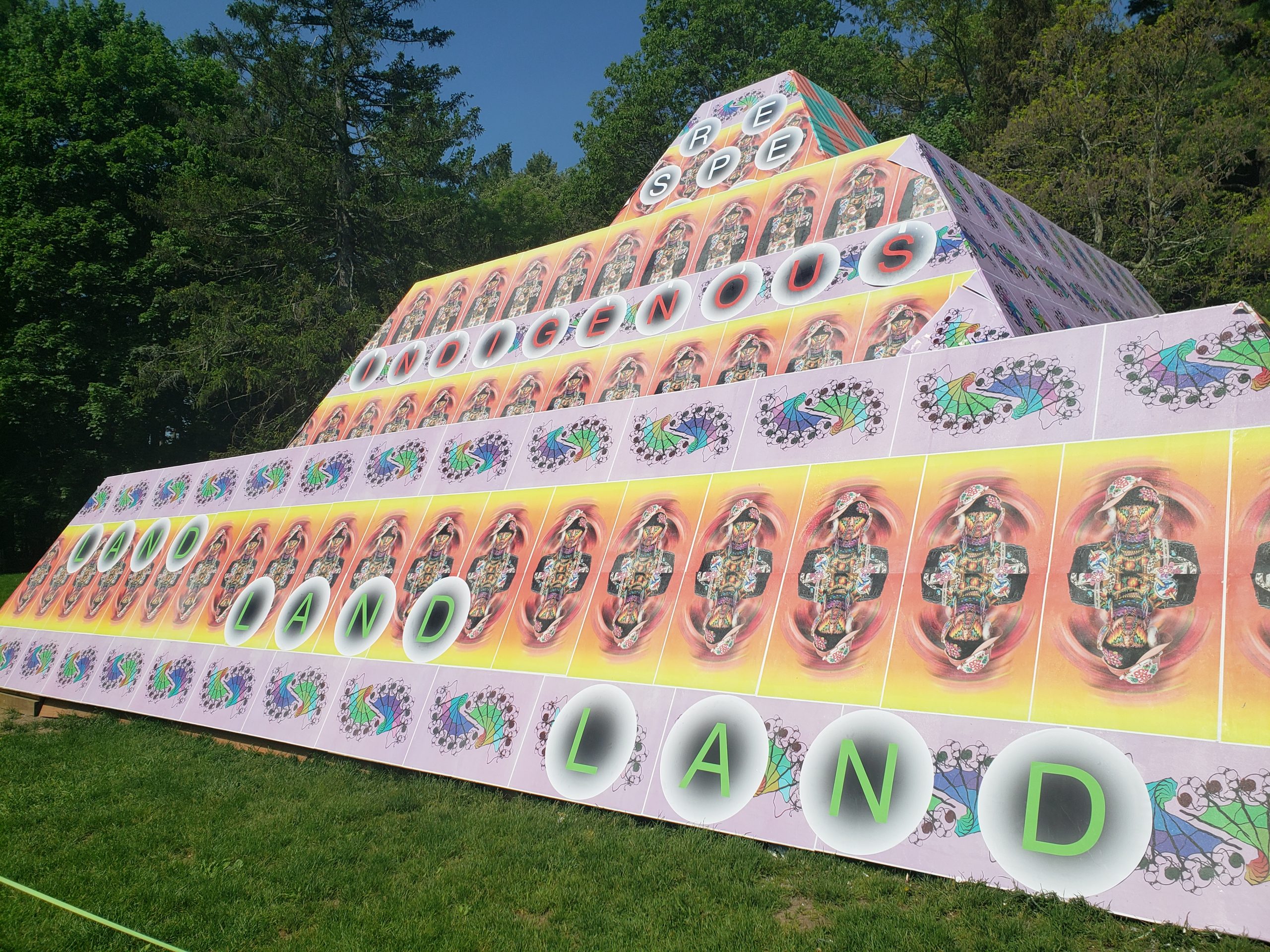 A monumental sculpture by renowned artist Jeffrey Gibson (Mississippi Choctaw-Cherokee), the title, Because Once You Enter My House, It Becomes Our House, comes from a song Gibson associates with nightclubs that have provided haven and community especially for LGBTQ+ people and BIPOC.

The ziggurat form references the earthen architecture of the ancient Mississippian city of Cahokia, which flourished in the seventh through fourteenth centuries, well before European contact. The installation will be adorned with phrases advocating for Indigenous space and culture and wheat-pasted posters co-created by Gibson and artists Eric-Paul Riege (Diné), Luzene Hill (Eastern Band of Cherokee Indians), and Dana Claxton (Hunkpapa Lakota).

Gibson invited Riege and Hill to stage performances on and around the installation.

Additionally, he invited Claxton to adapt one of her photographs, titled Lasso, to a monumental scale as a billboard on view in the Sculpture Park.

Learn more about the past programs and performances for Because Once You Enter My House, It Becomes Our House while it was on view at Socrates Sculpture Park.

Jeffrey Gibson’s vibrantly patterned work addresses his Choctaw-Cherokee heritage as well as his queer identity, and the aesthetics and biases associated with those identity markers. He works across painting, sculpture, video, performance, and installation art. He draws on Indigenous process and materials, and queer histories that use camp aesthetics as a critical strategy to deny any romanticizing of Indigenous cultures. By exaggerating these aesthetics Gibson forges conversations that transcend binary thinking. Merging styles and historical references, Gibson states, “I have continued to think about my practice as encompassing the past and present while considering the future.”

Gibson (b. 1972) earned a BFA from the School of the Art Institute of Chicago and an MA from the Royal College of Art, London. His work has been featured in recent solo exhibitions at the Denver Art Museum and the New Museum, New York, and was included in the 2019 Whitney Museum of American Art Biennial.  A 2019 MacArthur Fellowship recipient, Gibson is a member of the Mississippi Band of Choctaw Indians.

This project was originally commissioned by Socrates Sculpture Park, Long Island City. VIA Art Fund is the commissioning sponsor.

In the 2020-21 academic year, a team of design students at Lesley University College of Art and Design (Lesley Art + Design), Cambridge, MA worked with local and national Native advisors, historians, and legislative staff to support a bill to reconsider the racist seal, motto, and flag of the Commonwealth of Massachusetts. In addition to creating a series of interactive research documents, students co-designed a public art installation and accompanying podcast that honors the voices of Native cultural and political leaders.

Design students and faculty enacted a community-informed and relational design process that begins with empathy and proceeds through repeated consultation with Native project advisors. The resulting public art installation helps to propel a larger initiative related to the legislative bill to expand respectful awareness of Native communities today.

The student- and community-generated public art installation “ACKNOWLEDGE + LISTEN” and podcast series “Beyond the Flag” are now on view until June 1, 2022 in conjunction with artist Jeffrey Gibson’s monumental work “Because Once You Enter My House, It Becomes Our House” at the deCordova Sculpture Park & Museum which is located in Lincoln, MA on the unceded lands of the Nipmuc, Massachuset, and Wampanoag Peoples. Click here to follow the podcast BEYOND THE FLAG: 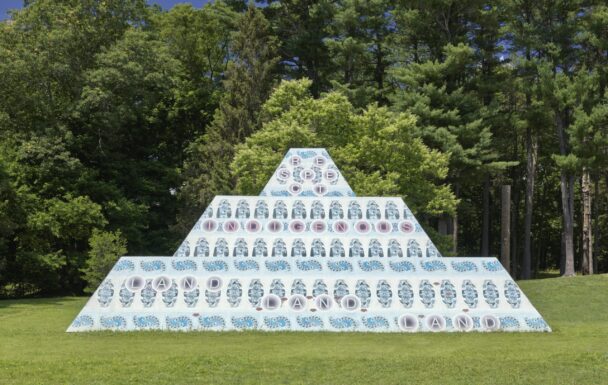 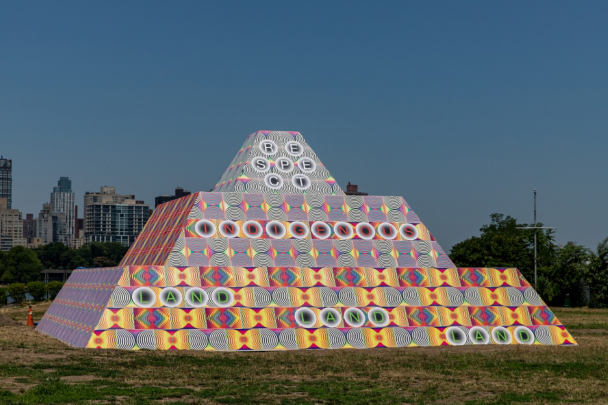 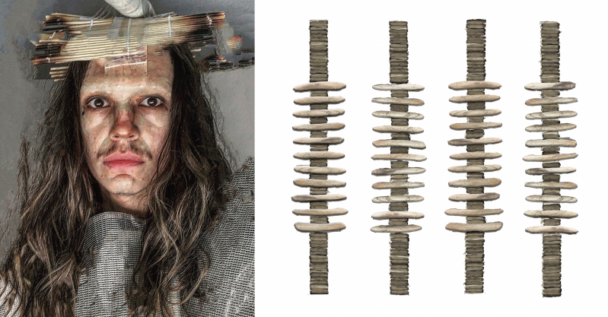 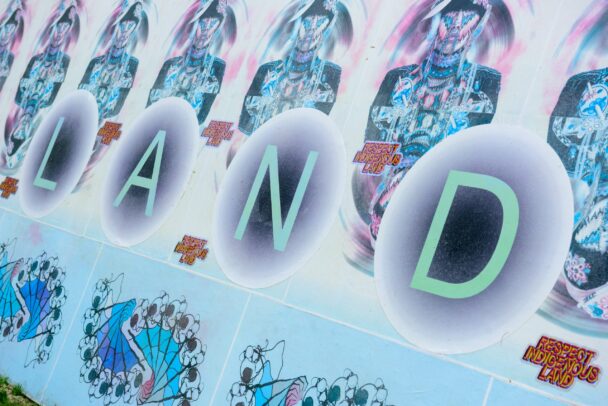 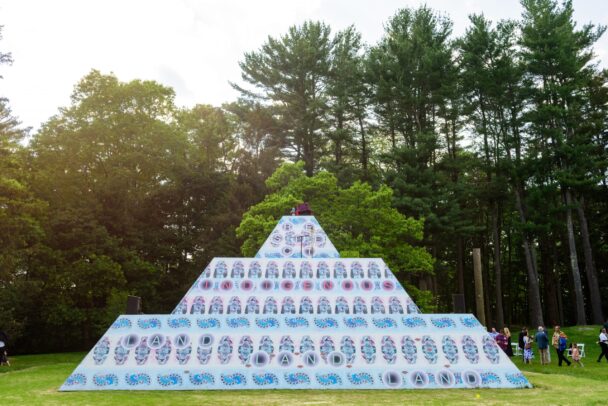 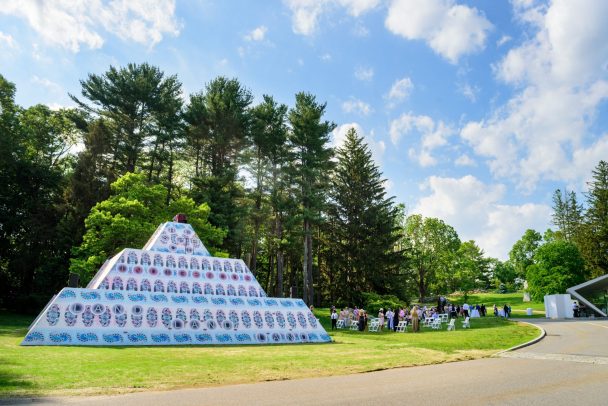