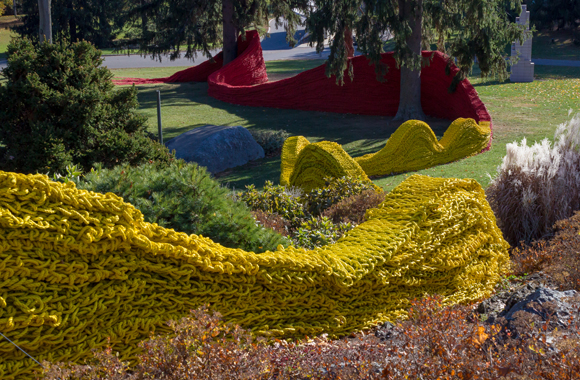 2011 Rappaport Prize recipient Orly Genger’s monumental installation Red, Yellow and Blue is among deCordova’s largest and most ambitious installations to date. Originally commissioned by the Madison Square Park Conservancy in New York City, where it was on view during the summer of 2013, Genger’s project is a notable collaboration for both MSPC and deCordova, as it marks the first collaboration between the two institutions.

Red, Yellow and Blue features Genger’s renowned usage of hand-knotted, paint-covered rope, configured in bright, undulating walls in three primary colors that wind through deCordova’s 30-acre lawn, pathways, and hillsides. At deCordova, the work is comprised of about 1 million feet of rope collected from the Eastern seaboard and 3,500 gallons of paint, weighing in at over 100,000 pounds. Red, Yellow and Blue is adapted from its initial presentation in New York City’s Madison Square Park to the contours of deCordova’s grounds. The miles of crocheted and layered rope articulate the topography of the Sculpture Park, reference the familiar low-lying stone walls that line the New England countryside, and offer fresh opportunities to engage with the landscape.

“For its second life at deCordova,” Genger notes, “I wanted to create a piece that would encourage visitors to travel through the Sculpture Park grounds as opposed to holding visitors in a space as it did in Madison Square Park. Like an elongated sentence meandering through the landscape, Red, Yellow and Blue will move and transition from ground to ground and color to color.”

Genger’s piece alludes to the work of modernist abstract painter Barnett Newman’s 1960s painting series Who’s Afraid of Red, Yellow and Blue?, and Minimalist sculpture by artists such as Richard Serra, Robert Morris, and Tony Smith. Genger’s installation, however, stands in sharp contrast to their industrially made, assertive monumental forms. The woven sculpture makes visible the thousands of hours of labor by a team of people to create a work not made by a machine. According to Genger, “I wanted to create a work that would impress in scale but still engage rather than intimidate. The tradition of knitting caries the sharing of stories and the installation draws on that idea.” 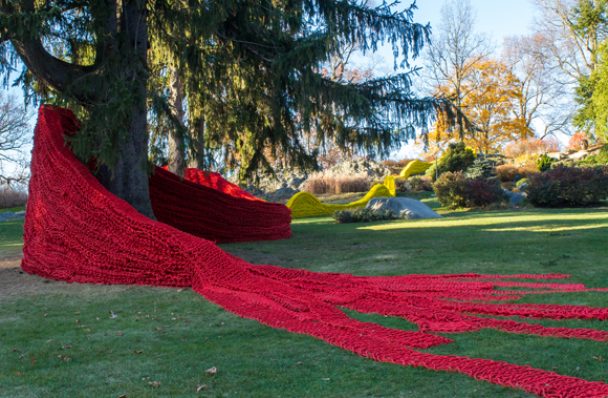 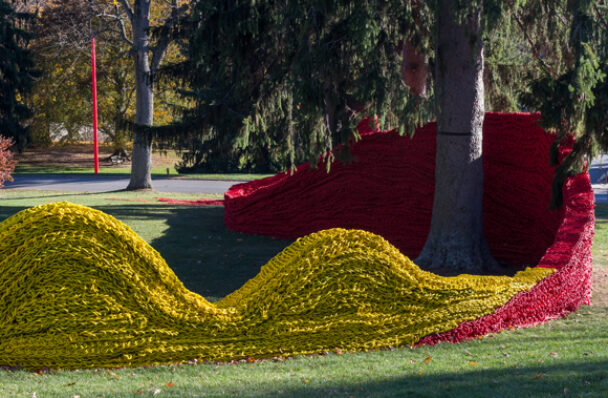 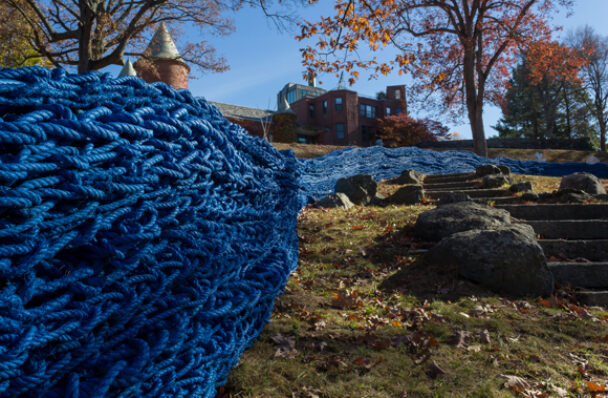