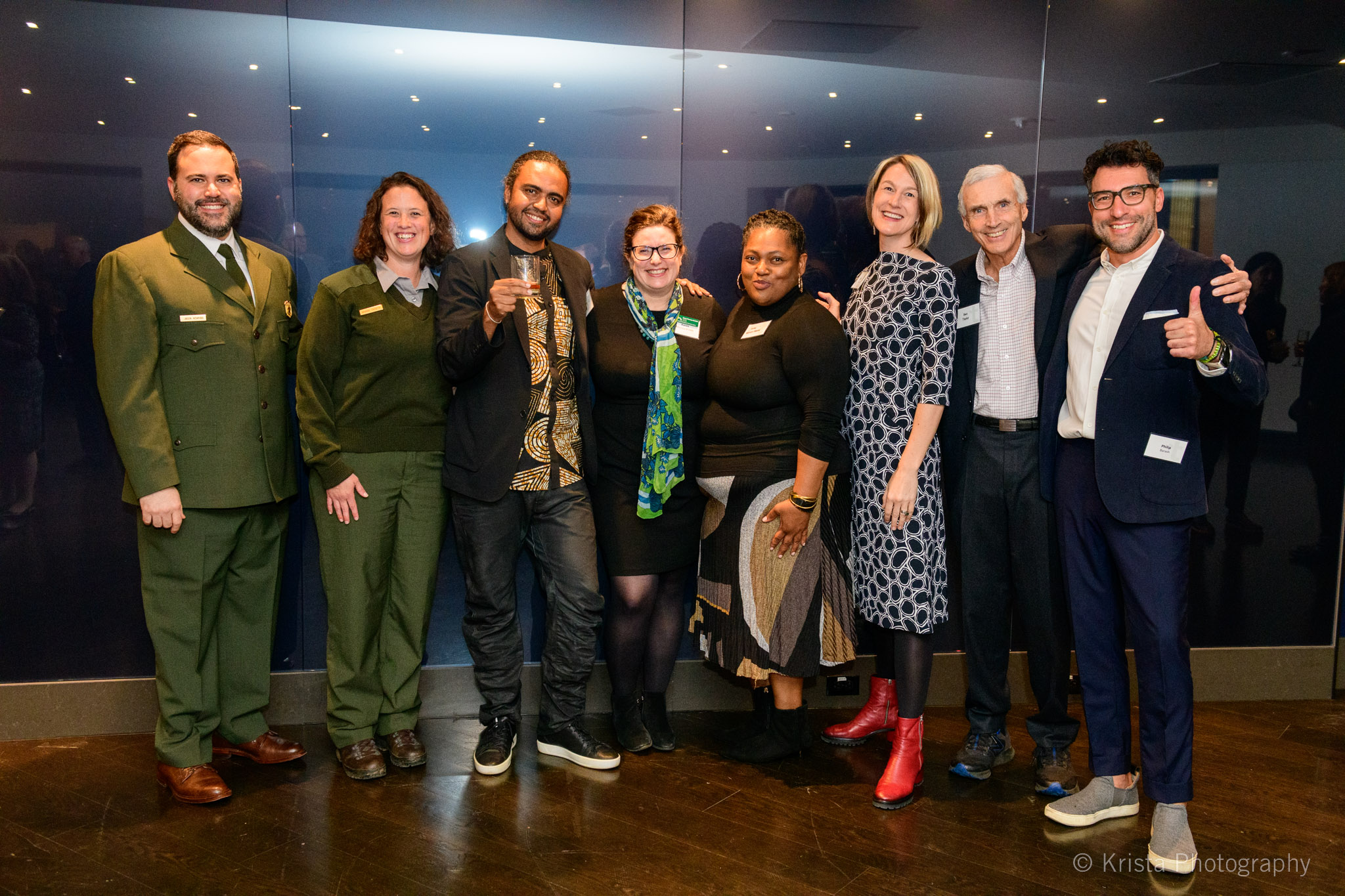 The Trustees, the state’s largest and nation’s oldest land conservation nonprofit, announces Olmsted Now: Greater Boston’s Olmsted Bicentennial has been selected as the recipient of its prestigious Charles Eliot Conservationist of the Year Award. The award was presented on November 3, 2022 at The Trustees’ 131st Annual Meeting held in the State Room at 60 State Street in Boston.

Olmsted Now is a collaborative initiative co-led by the Emerald Necklace Conservancy and Frederick Law Olmsted National Historic Site coordinated with Olmsted 200, the national commemoration of the 200th birthday of America’s preeminent landscape architect, Frederick Law Olmsted. Olmsted is known for designing stunning public parks and greenspaces including the 1,100-acre Emerald Necklace park system that connects 15 Boston neighborhoods; the Trustees’ own Moraine Farm and World’s End in Greater Boston; as well as Central Park in New York, the U.S. Capitol Grounds in Washington, D.C, and many others across the country.

“Olmsted Now is one of the most innovative examples we have seen during the 2022 Olmsted Bicentennial Celebration. It is an initiative that has successfully capitalized on Olmsted’s 19th Century legacy and vision for public parks as fundamental ingredients in the vitality of daily life in our communities as a springboard to foster relevant and important 21st Century civic dialog and action that champions community engagement in our treasured green spaces,” said Trustees Interim President and CEO Nicie Panetta. “Our founder Charles Eliot, a protégé of Frederick Law Olmsted, would be proud of the remarkable work Olmsted Now has achieved in catalyzing partners, leaders, and communities around a shared movement to elevate Boston’s parks as places of relevance, beauty, inclusion, and equity for all.”

Jen Mergel of the Emerald Necklace Conservancy accepted the award on behalf of the project, which was designed to meet this post-pandemic moment to reflect Boston’s diversity and center neighborhood voices.

“Rather than a physical conservation project, Olmsted Now sought to conserve and renew community connection,” Mergel said. “We poured energy into what Olmsted cared most about: the potential of greenspace to connect, uplift and empower people when they need it most. He believed increasing access to common ground could reinforce our common humanity–it could break down silos, heal divisions and reunite us.”

Initiated through monthly listening sessions in February 2020, Olmsted Now established a Committee of Neighborhoods to conceive and lead the bicentennial’s signature program: Parks Equity and Spatial Justice projects to “expand what is possible” in Boston greenspace. With $205,000 raised by the Conservancy, the Committee funded 16 BIPOC-led projects that activated 14 Boston neighborhoods from July through November to test what Olmsted Now values–“shared use, shared health and shared power in parks and public space”–could mean for Boston in 2022 and beyond. This work was part of over 200 programs offered by a coalition of 145 partners, and complemented by online public dialogues and monthly events along the Emerald Necklace centered in listening and partnership, using the parks as platform.

Conservancy President Karen Mauney-Brodek credited the initiative to Olmsted’s own idea of parks as places to ‘come together, and be seen coming together,’ saying “This was our opportunity to bring his idea forward in a truly community-led way that expanded cultural perspectives on land stewardship. We are gratified and inspired that this resonates with The Trustees here in the Commonwealth, and nationally.”

“Olmsted Now emphasizes Frederick Law Olmsted’s dedication to greenspaces that are based in ‘equity and benevolence.’ Throughout the past few years of a global pandemic, political discord, and social justice reckonings, we continue to see the significance and relevance of Olmsted’s beliefs and practices in the democratic right to open space; where parks continue to provide a critical role in helping mental, physical, and social health of communities,” Newman said. “Olmsted, and his partner Charles Eliot, offered impassioned appeals for the right of shared stewardship of these places and we are honored to be recognized for our shared work in continuing this legacy.”

Panetta added that as The Trustees continually looks to model its own stewardship of green spaces across the state, Olmsted Now will be celebrated as innovators of public discourse and engagement for the greater good of our community.

About the Charles Eliot Award
Each year, The Trustees recognizes an individual or organization that has made a significant impact to conservation in Massachusetts with the prestigious Charles Eliot Award. Charles Eliot, a landscape architect and protégé of Frederick Law Olmsted, founded The Trustees in response to the effects of growing populations and industrialization on Boston residents. At the time, Boston was losing its open space as the nation’s fourth largest manufacturing center with plants and factories springing up everywhere and consuming farmland, countryside, riverfronts, and even historic sites. As Boston’s population swelled and living conditions were deplorable, Eliot had the radical idea to set aside land for country parks that would provide fresh air, scenic beauty, and opportunities for quiet repose – antidotes to the ills of urban life. In a letter dated March 5, 1890 to the editor of Garden and Forest—Eliot outlined a “scheme” to save some of the “finest bits of natural scenery near Boston,” for the “delight [of] many future generations.” His letter became the catalyst for a movement that convinced the Massachusetts State Legislature to establish, just one year later (Chapter 352 of the Acts of 1891), a unique statewide organization “for the purposes of acquiring, holding, maintaining and opening to the public … beautiful and historic places … within the Commonwealth.” Thus, The Trustees of (Public) Reservations was created and became the first preservation organization of its kind in the world. Within that same year, Eliot also helped to establish the state’s first regional park district, the Metropolitan Parks Commission (MPC), which later became the Metropolitan District Commission (MDC) and is now the Department of Conservation and Recreation (DCR).

About The Trustees
Founded by landscape architect Charles Eliot in 1891, The Trustees has, for more than 130 years, been a steward of distinctive and dynamic places of historic, natural, and cultural value. As the nation’s first and Massachusetts’ largest preservation and conservation nonprofit, Trustees landscapes and landmarks continue to inspire discussion, innovation, and action today as they did in the past. Supported by members, friends and donors, The Trustees’ 123 reservations are destinations for residents, members, and visitors alike, welcoming millions of guests annually. thetrustees.org