The History of Weir Hill

Prior to settlement, Weir Hill undoubtedly was the site of indigenous activity; a 1968 archaeology survey identified a campsite at the southeast end of the reservation. It is likely that indigenous peoples set fire to the hill to improve the landscape for hunting, and used submerged fish weirs (woven fences with stakes) to catch alewives in Cochichewick Brook before they reached Lake Cochichewick to spawn. The reservation takes its name from these fish weirs.

In the mid 17th-century, early settlers cleared the slopes of Weir Hill for use in livestock grazing, including sheep and cattle. In the 18th and 19th centuries, dams were built along Cochichewick Brook to power lumber and grist mills, and for the past 100 years, Lake Cochichewick has provided North Andover’s main supply of drinking water (public access to the lake is not permitted).

In 1853, industrialist Moses T. Stevens married Charlotte Emeline Osgood, and over the next 30 years, Stevens’ prosperous flannel wool mill enabled them to acquire much of the land on the west shore of the lake, including Weir Hill. Here, Stevens built a country estate of more than 500 acres that included a magnificent redbrick and brownstone mansion with accompanying stables, greenhouses, and farm buildings.

Later in his life, Moses T. Stevens helped found the North Andover Country Club, which was built in 1897. The original clubhouse’s half-hidden foundation can be seen in the southeast corner of Weir Hill, right on the shore of Lake Cochichewick. At the time, members would paddle across the lake to the links to play golf and then back to the club house for dinner and dancing in the evening. In 1909, the club was moved across the lake where open farmland allowed for the development of a golf course and new clubhouse. 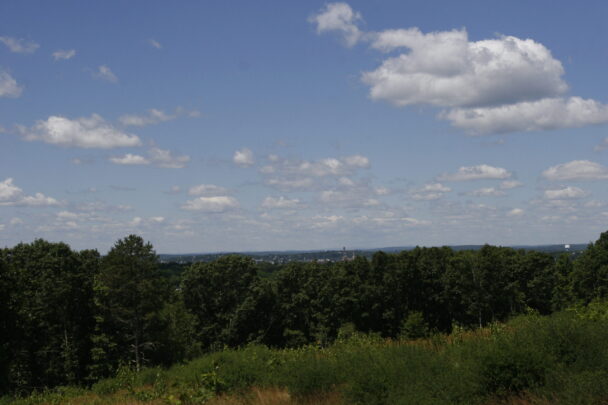 Visit the Weir Hill page for photos, information on hours, nearby events, directions, a property map, and more
Visit