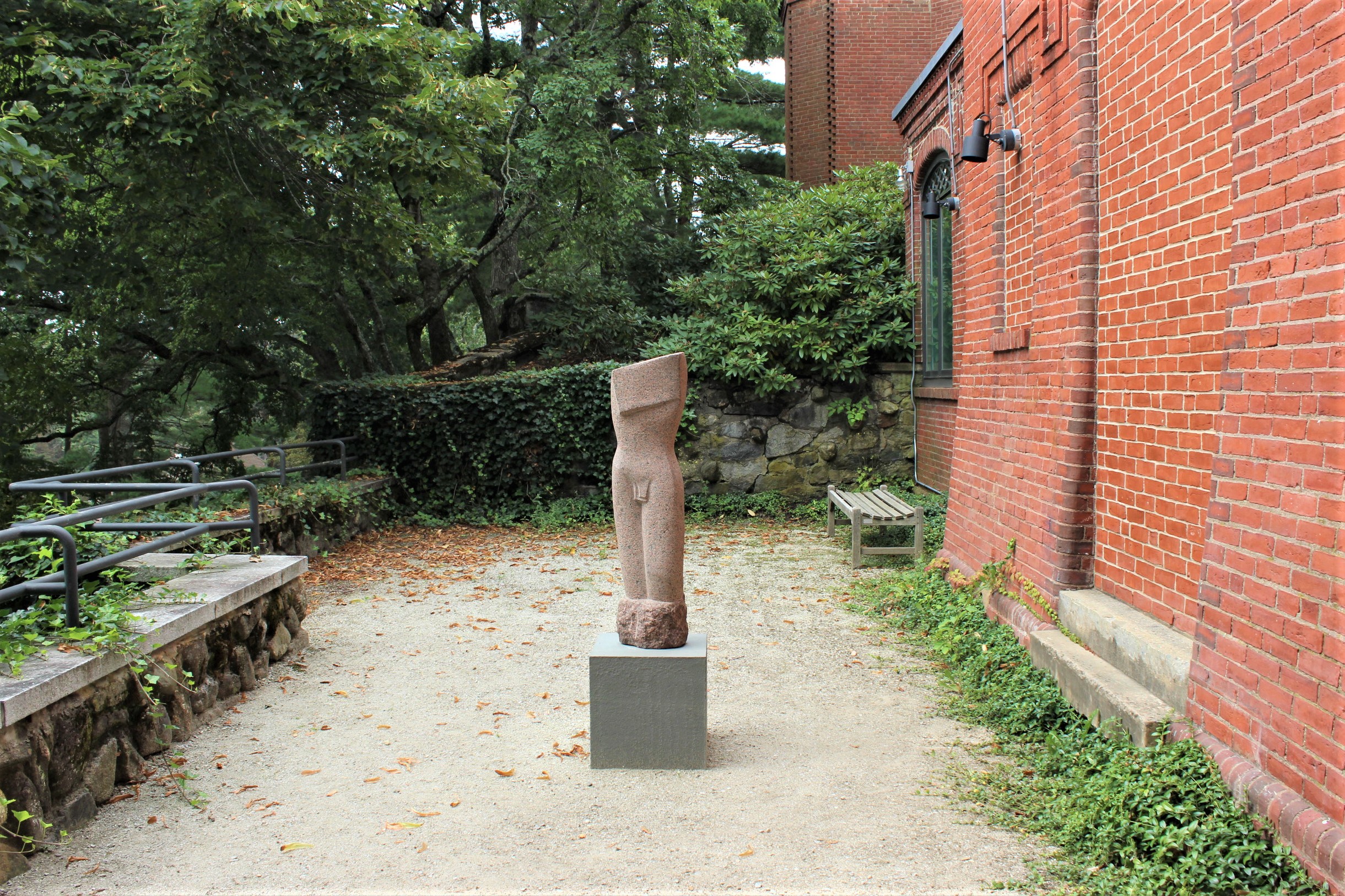 Reno Pisano creates sculptures that range from purely abstract forms to figurative statues and bas-relief portraits. While he sculpts in plaster, bronze, and wood, Pisano is best known for stone carving, particularly in granite. He states: “I create my work in direct response to the natural material I use, as well as the subject it references. The material I like to use best is stone because it brings the work closer to the earth’s composition. Some of my work is ‘tectonic,’ suggesting the effect of time on stone. I find that I often reference things that have happened before, and cemeteries hold a particular fascination for me. They are redolent with history and social perspectives from the past.”

Carved in pink granite, Torso depicts an abstracted human torso standing in a contrapposto pose. The sculpture’s unembellished surface emphasizes the form’s angularity, mass, and verticality. Inspired by the work of early and mid-century modernist sculptors, such as the Lithuanian-American artist William Zorach (1887-1966) and Japanese-American sculptor, landscape architect, and artist Isamu Noguchi (1904–1988), Torso merges abstraction with a modern revival of Archaic and Classical forms, such as standing caryatids used as columns in Greek temples. Torso evokes a sense of timelessness, due to its elemental form and lack of ornamental details. The rough-hewn texture of granite further imbues this work with an earthbound vitality.

Torso has strong connections to deCordova’s founding history; it was shown in the Museum’s first sculpture exhibition in November 1950. Organized by then-director Frederick P. Walkey, Pisano’s piece was displayed alongside work by Nathaniel C. Burwash and Bill Barrett. Torso was also awarded the Sculpture Prize at the first Boston Art Festival in 1952.

Born in 1923 in Lynn, Massachusetts, Pisano attended and later taught at The School of the Museum of Fine Arts, Boston. In 1970, he became a founding faculty member at Monserrat College of Art in Beverly, Massachusetts. Pisano was an influential teacher, instructing artists such as Carlos Dorrien, whose granite sculpture Little Red Riding Hood and Other Stories (2000) is installed at deCordova. Over the course of an eight decade-career, Pisano has also created commissioned sculptures of historical figures such as Frederick Douglass, the African-American social reformer, and Mary Baker Eddy, founder of Christian Science. Pisano has several public artworks installed in Boston, including a relief portrait of the American Impressionist Childe Hassam located in the Childe Hassam Park.