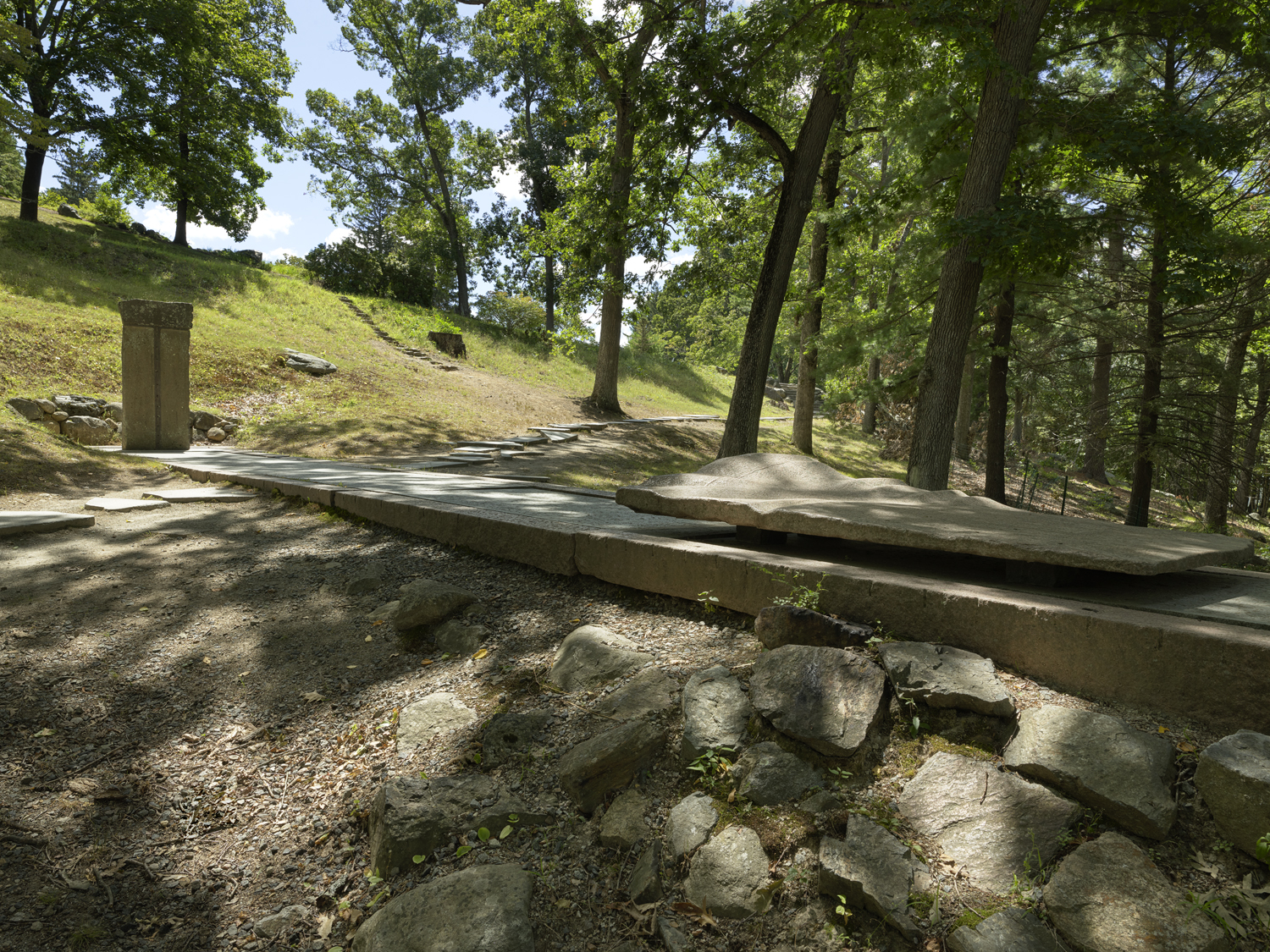 Creating sculptures that are both abstract and referential, Carlos Dorrien takes inspiration from nature, architecture, archaeological ruins, and the human figure. Born in Argentina to parents of Mexican descent, Dorrien has traveled extensively in South America and Mexico, as well as in Europe, India, and Egypt. His exposure to the architectural remnants of ancient civilizations while abroad catalyzed his exploration of stone carving and the creation of ruins. Since receiving his first public art commission in 1979, Dorrien has designed multiple site-specific sculptures intended to highlight elements of their local histories by working in concert with their surroundings. His public art installations demonstrate his ability to repurpose ancient architectural forms as convincing “monuments” for contemporary life. These monuments often manifest as granite monoliths or gateways that appear to belong to a distant past. To create the illusion of antiquity, Dorrien looks to the original shapes and surface qualities of granite, his primary medium, to guide his carving process. In his words, his sculptures are “a study and search for resonance with form” that illustrate the interplay of smooth and rough, finely carved, and heavily textured surfaces. Dorrien encourages the public to interact with his sculptures, which he envisions as inconspicuous pieces of the preexisting landscape rather than artifacts on display.

Little Red Riding Hood and Other Stories is a large-scale sculpture designed for the promontory overlooking Flint’s Pond. Like Dorrien’s public art commissions, it employs ancient architectural forms, including a post-and-lintel entryway, to create an intimate space that facilitates interactions between visitor and environment. The sculpture references the children’s tale of the same name, which narrates a young girl’s journey from adolescence to adulthood. To design an environment that invites viewers to play the part of Little Red Riding Hood, Dorrien brings together three elements: a door, a flying carpet, and a granite floor. For Dorrien, doors and flying carpets are symbolic vehicles for accessing the creative imagination. The door, specifically, appears in Dorrien’s work as a metaphor for embarking on a journey. At the other end of the installation is the flying carpet, a single, thin granite slab that bends up towards the door as if posed to take the viewer on said journey. The elevated granite pathway then functions as a liminal space between the two. About the importance of the floor in his work, Dorrien has said: “The carved slab opens up the spatial life of the object and its surrounding space. Also, the slabs can inspire in the objects on top of them a sense of ceremonial mystery.” Allowed to interact with the space, viewers are immersed in its narrative. As a personal gesture, Dorrien etched the following words into one end of the granite: “A mi mamá que mi enseñó s volar sin alfombra,” or “To my mom who taught me to fly without a carpet.” To this end, the pathway, door, and carpet represent the experience of growing up and taking risks.

Dorrien was born in Buenos Aires, Argentina, in 1948. He studied at the Montserrat School of Art from 1971 to 1974, and the Massachusetts College of Art. His public art commissions may be found throughout New England at venues including the South Boston Maritime Park, Harvard Square, Logan International Airport, and the Stamford Courthouse in Connecticut. Dorrien has also served as the Sculptor in Residence at Bentley College in Waltham, MA, a professor at the New England School of Art at Suffolk University in Boston, MA and has been faculty at Wellesley College since 1984. He has been awarded grants twice by the National Endowment of the Arts, first, for his work in public spaces and, later, for his work in the visual arts. He currently lives and works in Massachusetts and Vermont.