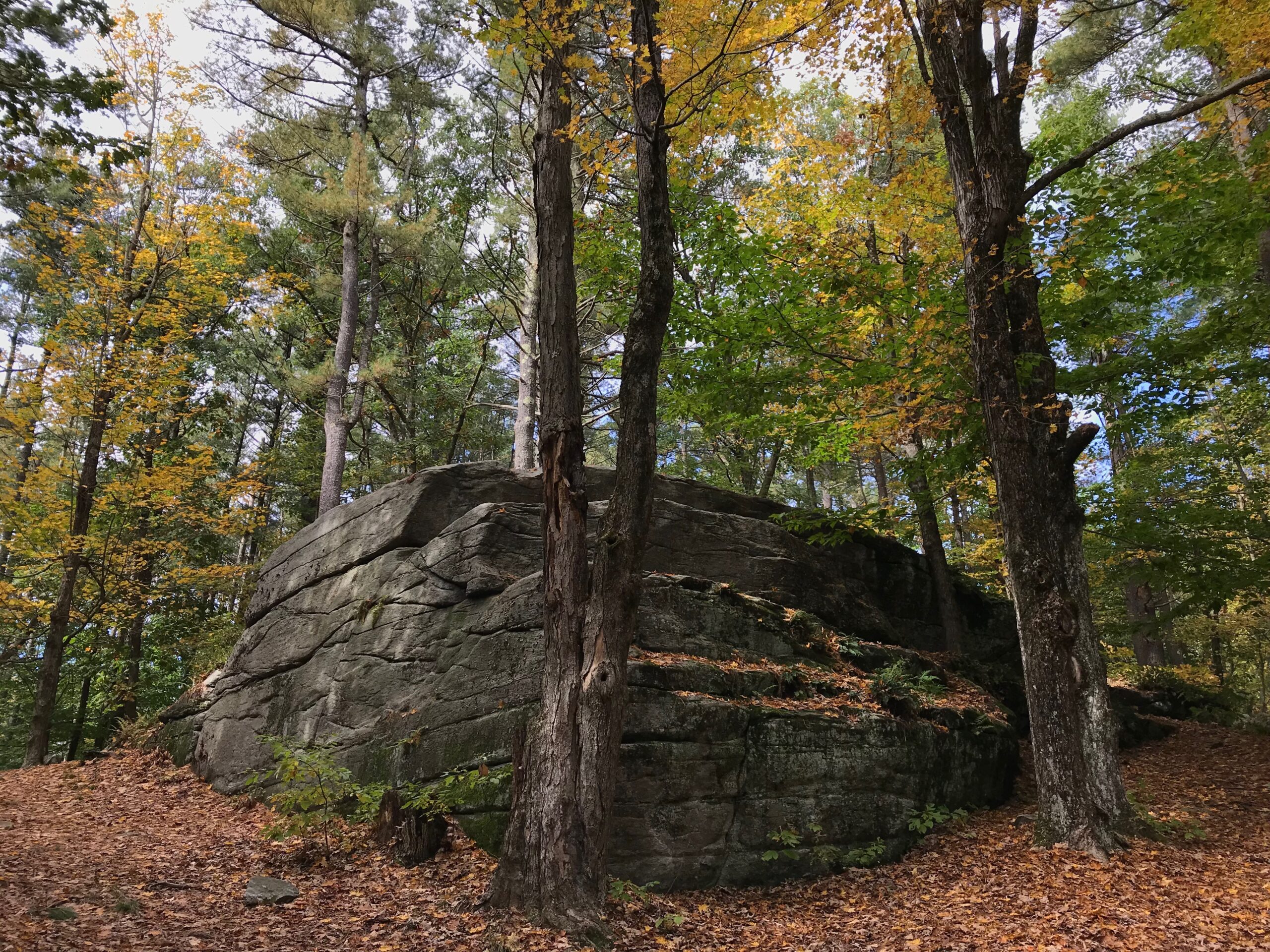 The Short Story
Angered by the spread of colonial settlements westward, the chief King Philip (Metacomet) led the Nipmuc, Narragansett, and Wampanoag in defense of their land. In February 1676, several hundred Native Americans attacked Lancaster and captured Mary White Rowlandson, her three children, and twenty others and took them into the wilderness for several months. They returned to Lancaster in late April of 1676, where, as the inscription says, John Hoar of Concord negotiated Mary’s release at this huge, flat-topped granite ledge.

The Long Story
Mary White Rowlandson (1637-1711) told her own story in “The Narrative of the Captivity and Restoration of Mrs. Mary Rowlandson,” which first appeared in public in 1679, three years after her capture and release. It would become a 17th-century bestseller on both sides of the Atlantic with 15 editions published before 1800. According to Neal Salisbury, who re-published Mary’s narrative in 1997 as “The Sovereignty and Goodness of God,” in 1653, Lancaster was a frontier town in the “wild, wild west” of Massachusetts. The Rock southeast of Wachusett Lake was a point of contact between two civilizations.

Many of New England’s Native American tribes, angered by the spread of colonial settlements, the conversion of forests into farmland, and perceived injustices at the hands of colonists, joined the Wampanoag sachem Metacom (called Philip by the English) in an attempt to drive the colonists from their new homelands, in the process destroying hunting grounds, winter camps, and settlements. Mary White Rowlandson’s narrative begins on February 10, 1676, when 400 Nipmucs, Narragansetts, and Wampanoags attacked Lancaster “about sun-rising.” Mary, her three children, and 20 other captives were taken into “the vast and desolate wilderness, I knew not whither.” After many “removes” (shifts of locations), they ultimately rendezvoused with King Philip near the present day New Hampshire-Vermont border north of Northfield, MA. Her bible was a source of comfort throughout, and her sewing skills, quickly discovered, placed her in good favor; for a shilling, she was asked to make a shirt for King Philip.

Mary and her captors returned by late April 1676. John Hoar of Concord, who had instructed and protected a group of “praying Indians,” went to negotiate her release at the flat-topped outcrop overlooking a meadow where the Native Americans had camped. She writes, “Philip who was in the company came up and took me by the hand and said, ‘Two weeks more and you shall be Mistress again.’” Later, a ransom was raised “by some Boston gentlemen.” She traveled to Boston with John Hoar to be reunited with her husband, son, and eldest daughter (the youngest had died from wounds eight days after the raid).

A modest-sized reservation with a momentous history, it was here in April of 1676 that King Philip’s War hostage Mary White Rowlandson was released from Indian captivity.
Redemption Rock