Noanet was home to Indigenous Peoples, farming, and a sawmill industry along the river. 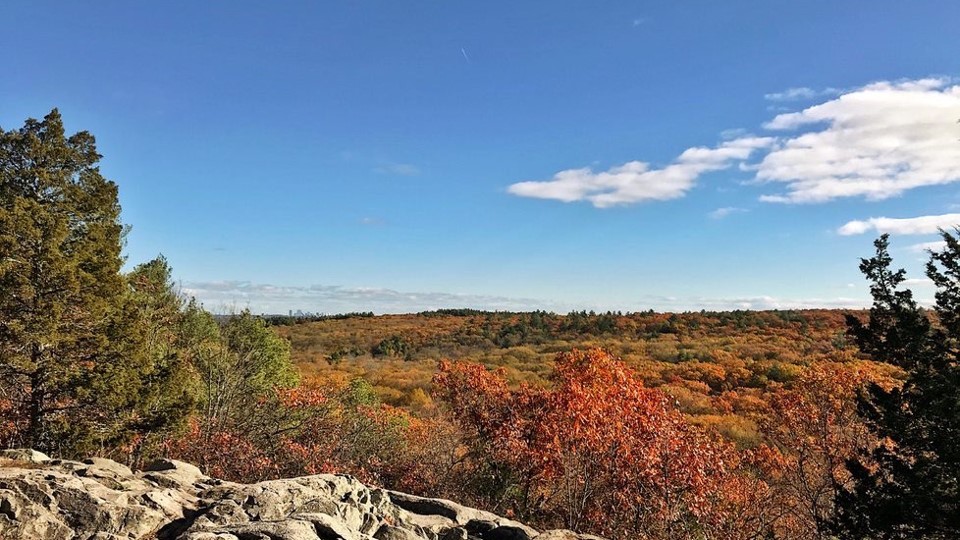 Property History
“Noanet” was likely the name of a leader of a group of Indigenous Peoples probably affiliated with the Nipmuc and Wampanoag, who camped on this land, fished the Charles River, and hunted along Noanet Brook. Colonialist settlers used the present-day Powisset Farm for agriculture as early as 1720. Powisset’s most notable 18th-century farmer was Samuel Fisher, Jr., who was raising livestock and growing hay and corn by the 1790s. While Powisset Farm was arable, owners initially found little use for the granite hills and ledges and lowland brook and swamp of the adjacent woodlands.

Fisher was the first to look at Noanet Brook and see the potential for industry. He built a sawmill along the banks and his business boomed in the 1820s and 1830s, producing building materials for the growing Town of Dedham.

In 1815, investors seeking to harness the power of Noanet Brook falls established the Dover Union Iron Company, and the steep banks of the ravine between Noanet Peak and Strawberry Hill were excavated to make room for a mill. But the company soon fell on hard times and was dissolved by 1840. In 1876, the milldam was breached by a flood and fell into disrepair until 1954, when it was restored. Today, the 24-foot-high dam and opening to the underground tailrace are preserved, but visitors will have to imagine a towering 36-foot overshot wheel that powered the mill.

In the 1830s and 1840s, Calvin Richards operated a mill on Noanet Brook on the northeast corner of the property. The site’s shallow slope possibly required an above-ground aqueduct 200 feet long that delivered water from upstream.

In 1923, Amelia Peabody purchased a farm on Dedham Street in Dover. Over the next six decades, she acquired parcels of land stretching south to Powisset Farm, eventually forming an 800-acre estate onto which she invited the public to share her many agricultural and conservation interests. Peabody developed bridle paths throughout the lands she acquired for both herself and the Norfolk Hunt Club. These, and associated fire roads, were meticulously maintained for hiking, horseback riding, and cross-country skiing by the public.

Initially, Peabody used part of her property to stable thoroughbred horses for show, sale, hunting, and riding. By the end of World War II, she had acquired a herd of Hereford cattle and a number of Yorkshire pigs, the best specimens of which she entered in livestock shows throughout the region. “Field days” for pig farmers and cattle breeders were frequently held at her farm. She was also interested in food crops, and planted and harvested potatoes and sweet corn. Her interest in conservation led Peabody to plant native species of wildflowers, trees, and shrubs on parts of her estate. To ensure the long-term conservation of her the land, she bequeathed property to both the New England Wildflower Society and The Trustees of Reservations when she died in 1984.

Property Acquisition History
Original acreage a bequest, with endowment, of Amelia Peabody in 1984. Added to previous gifts of Mrs. Henry B. Cabot in 1975 and Henry B. Cabot, Jr. in 1979. Additional land given by Brookfield Estates in 1996.

Follow a network of trail across a grand preserve that features woodlands and ponds, a former mill site, and Noanet Peak, which offers views of the Boston skyline.
Noanet Woodlands