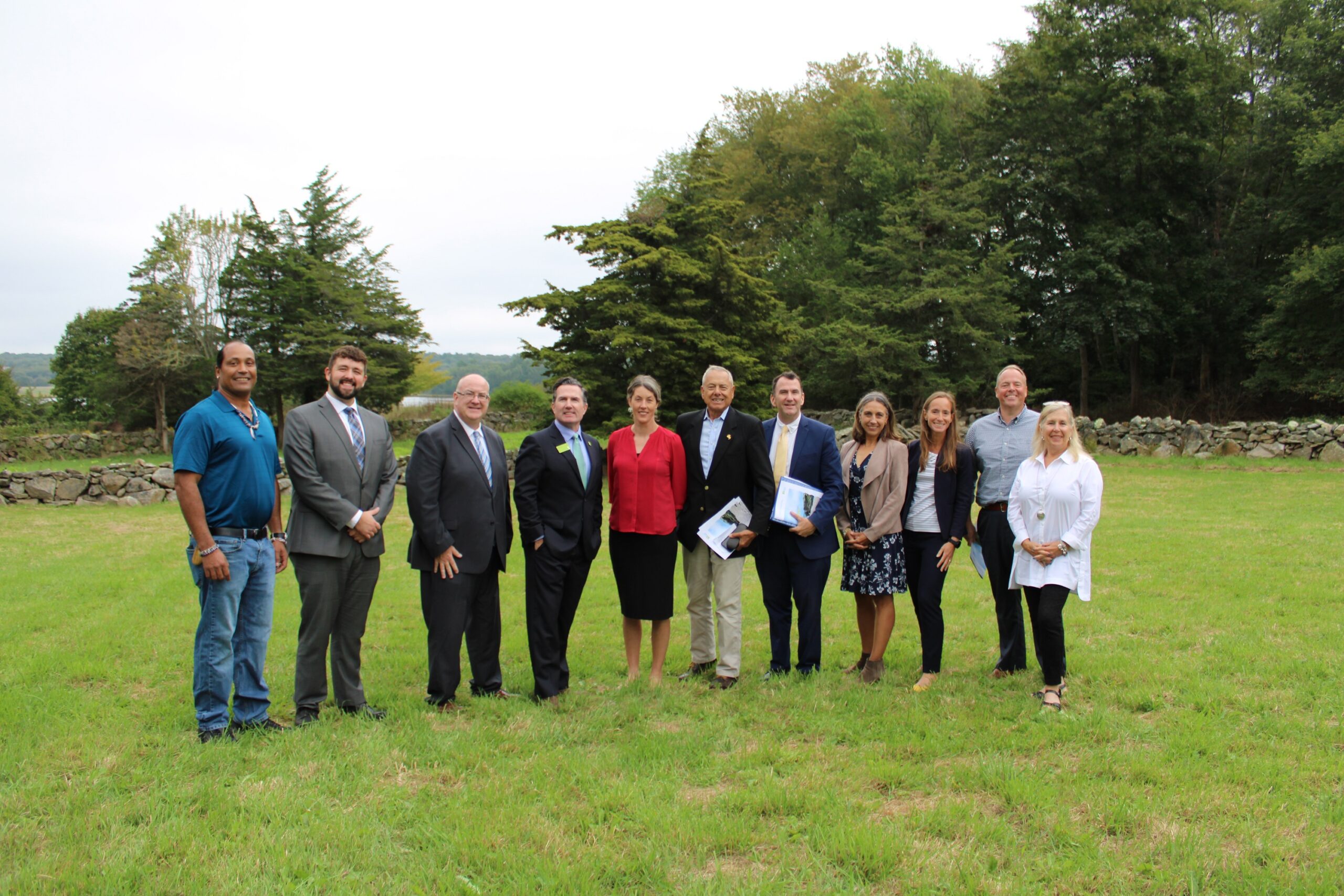 “The impacts of flooding and storm surge may be significant in this region,” notes Cynthia Dittbrenner, Trustees Director of Coast and Natural Resources. “In addition to impacts projected to our homes, businesses, and infrastructure, projections show vast losses of coastal salt marshes. When natural landscapes like salt marsh deteriorate, so does the overall resilience of our coastlines to storm surge and sea level rise.”

Among other key findings:

The report’s projections are based on publicly available data, interviews with town leaders, and evidenced-based reports from private and public organizations and agencies as well as independent research.

“Around the world, we have been seeing the dangerous impact of climate change. And as this report shows, Massachusetts’ communities and public infrastructure are at risk if we don’t act,” said U.S. Senator Elizabeth Warren. “I was glad to support the Inflation Reduction Act in Congress which will bring enormous investments to frontline communities across the Commonwealth to help fight this crisis and right environmental injustices. I’ll keep pushing for further action to protect our planet from this existential threat.”

“This report is a bold call to action to develop a stronger national – and global – response to the far-reaching impacts of climate change. The climate crisis is not at our doorstep, it is in our homes. From the shores of Swansea and Somerset to the inlets of Wareham, community leaders and citizens are grappling with a wave of coastal challenges,” said U.S. Senator Ed Markey. “We know our cities and towns cannot stand alone in responding to this crisis. The landmark Inflation Reduction Act and Bipartisan Infrastructure Law will provide critical funding to support state and local efforts, and protect the future of our children, our communities, and our Commonwealth.”

“Here on the South Coast, the impacts of sea level rise and storm surge are forecast to affect the most significant fishing port in our nation,” said U.S. Representative Bill Keating (MA-09). “Currently protected by a Hurricane Barrier built in 1966, the Port of New Bedford supports approximately $1.8 billion in total personal wages annually. As shown in this year’s State of the Coast report, as soon as 2050, high tides alone are projected to be extremely disruptive to what is a powerhouse of the Blue Economy. We must make investments today to retrofit existing infrastructure and employ nature-based solutions to slow the effects of climate change through investments made in clean energy. As noted by The Trustees, our South Coast region has a major role to play.”

“The State of the Coast report highlights the importance of adaptation efforts for this region,” said U.S. Rep Jake Auchincloss (MA-04). “As we continue to see ‘once in a generation’ storms year after year due to the urgent climate crisis, it is essential that we adapt our roads, buildings, and bridges to meet the needs of our residents and infrastructure. I believe that if we set politics aside and focus on the science in front of us, we can ensure our cities and towns are prepared for the challenges we face ahead of us.”

The Trustees’ report looks at current efforts by the region to confront these challenges and adapt using climate resiliency plans, interdisciplinary partnerships, and state and federal funding. The report also proposes a series of potential actions that could bolster these efforts in the region, including expanding coastal projections, restoring salt marshes, rethinking town bylaws, and modernizing the permitting process.

The report states, “There is a common factor in many of the most compelling resilience solutions—collaboration. The Trustees encourages partners in the region to work together to achieve the following forward-thinking actions.”

“The towns of Fall River, Somerset, Swansea, and Westport are among those examined in The Trustees latest State of the Coast report, and face significant impacts from climate change now and in coming decades,” said Senator Michael J. Rodrigues, Chair of the Senate Committee on Ways and Means (D-Westport). “Our communities are aware of the changes ahead and state investments are supporting adaptation efforts to confront the challenges we see today and expect to accelerate in the future. Over the last decade we have made huge strides in coastal resilience preparedness, and reports such as this can help to spur further action, suggest innovative approaches, and connect the dots on where deeper collaboration can play a role. We are stronger together.”

“In Westport, as soon as 2050, 89% of critical high marsh habitat may be lost to flooding or conversion to low marsh, and nearly half of the entire salt marsh in Westport may be completely lost,” said Representative Paul A Schmid III (D-Westport). “This is just one of the significant findings of The Trustees latest State of the Coast report, which among the 14 towns analyzed, includes the communities of Fall River, Westport, and New Bedford. These are iconic places where our economies are very much connected to the coast. I remain committed to addressing the impacts from climate change, including sea level rise and storm surge, that are expected to affect us in accelerating ways, and reports such as the State of the Coast can help us to examine impacts and prioritize projects on a regional scale.”

Coastal landowners, town officials, and other stakeholders can use State of the Coast to identify areas of critical concern and prioritize investments in resilience projects. The report also offers a visual comparison of community impacts town-by-town and suggestions for how municipalities and residents can take action to address the impacts of climate change in their own communities.

“The Baker-Polito Administration understands the significant climate challenges faced by cities and towns around the Commonwealth, but especially coastal communities within Buzzards Bay and Narragansett Bay, and since coming into office in 2015 has invested over $1 billion in climate spending and created the Municipal Vulnerability Program, where over 90 percent of communities are enrolled, to provide important funding and tools to implement key climate resilience projects, said Lisa Berry Engler, Director of the Massachusetts Office of Coastal Zone Management. “The Massachusetts Office of Coastal Zone Management will continue to actively addresses the challenges faced by communities along the coast by promoting climate resilience strategies at the local level, including providing direct funding through the Coastal Resilience Grant Program, and build upon ongoing partnerships to further address climate threats now and into the future.”

The State of the Coast report is the latest of a series of reports published over the last three years. The inaugural report looked at coastal impacts on the North Shore in 2020 and was followed by a report detailing projections for the Islands—Martha’s Vineyard, Nantucket and Gosnold—in 2021. Full PDFs of reports from each year can be downloaded at thetrustees.org/coast, where interactive mapping and more detailed data is also available.

“We know that climate change is having a profound impact on our vulnerable coastal areas–and we also know that we cannot wait to act,” said John Judge, President and CEO of The Trustees. “Now is the time for all of us to work in partnership to save our local habitats, protect our nature infrastructure, and preserve our local economies. Together we can engage in effective solutions in order to preserve these places of work, community, and beauty for generations to come.”

More about The Trustees
Founded by landscape architect Charles Eliot in 1891, The Trustees has, for 130 years, been a catalyst for important ideas, endeavors, and progress in Massachusetts. As a steward of distinctive and dynamic places of both historic and cultural value, The Trustees is the nation’s first preservation and conservation organization, and its landscapes and landmarks continue to inspire discussion, innovation, and action today as they did in the past. We are a nonprofit, supported by members, friends and donors and our 123 sites are destinations for residents, members, and visitors alike, welcoming millions of guests annually. www.thetrustees.org.