stainless steel and wire
Lent by Diamond-Newman Fine Arts LLC. Installation support has been provided by those who generously raised their paddles at deCordova’s Party for the Park 2014. 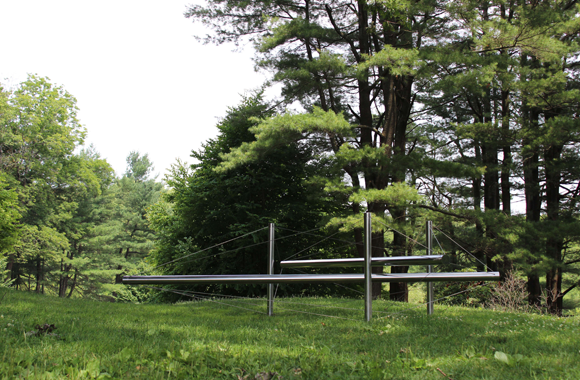 Kenneth Snelson, "Wiggins Fork", 1967 46 ¾ x 140 x 140 inches, stainless steel and wire Lent by Diamond-Newman Fine Arts LLC. Installation support has been provided by those who generously raised their paddles at deCordova’s Party for the Park 2014.

Kenneth Snelson is widely known for aluminum, steel, and wire sculptures that use the structural principle of tensegrity or, as Snelson describes it, “floating compression.” In Wiggins Fork, the taut wires connecting the stainless tubes create continuous tension by pulling inward, while the metal poles provide points of compression that push outward to stabilize the form. This delicate balance of opposed forces allows the sculpture to follow the logic of its own construction, independent of the force of gravity. In contrast to traditional construction methods, none of the stainless steel tubes in Wiggins Fork come into contact to support one another.

Snelson developed his first small-scale designs with “floating compression” as a student in the late 1940s at Black Mountain College in North Carolina. He studied with the designer and inventor, Buckminster Fuller who wanted to incorporate Snelson’s discovery into his own futuristic geodesic domes. While aware of the practical applications, Snelson continued to make his “floating compression” structures as art. He believes tensegrity gives form to the unseen forces of the world, representing both microscopic and cosmic orders. The “appearance of solidity,” he says, “which we know intellectually to be the illusion of the mechanical world, provides us with things so commonplace as nuts and bolts, and we miss the point quite easily that we are in the presence, again, of one of these marvelous mysteries: that one thing can connect to another only by entering into orbit around it.” Snelson’s sculptures reflect his understanding of the discontinuous nature of the universe and the commonly held scientific principle that matter never physically touches other matter.

Snelson has exhibited in numerous solo and group exhibitions at venues including the Jardin du Palais Royal, Paris; Contemporary Sculpture Center, Tokyo, Japan; National Academy of Sciences, Washington, D.C.; and Albright-Knox Art Gallery, Buffalo, NY. In 1999 he was honored with the Lifetime Achievement Award from the International Sculpture Center, Hamilton, New Jersey. His work is part of the permanent collections of many national and international museums including The Art Institute of Chicago; Museum of Modern Art, NY; Walker Art Center, Minneapolis; and Rijksmuseum Kröller-Müller, Otterlo, The Netherlands.

stainless steel and wire
Lent by Diamond-Newman Fine Arts LLC. Installation support has been provided by those who generously raised their paddles at deCordova’s Party for the Park 2014.