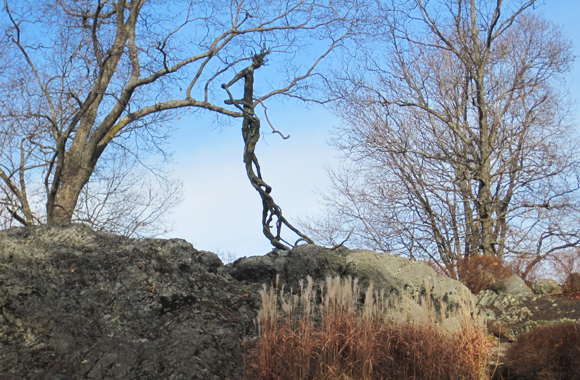 By combining human form with natural motifs, Richard Rosenblum endows his sculptures with a mystic connection to nature. Their shamanistic properties recall the energy of the earth. This interest in natural forms relates to his work as a collector of Chinese rocks from the Tang dynasty (618-907), which were considered to be microcosms of the universe. Fascinated by the holes within holes of these perforated stones, Rosenblum was inspired by the way they suggest an infinite world within a discrete object. The contemplation of nature to facilitate cultural refinement is at the heart of the Chinese scholars’ practice, and likely inspired Rosenblum’s sculptures.

Cast from the roots of dead trees, Venusvine fluctuates between recognizable form and raw, tangled energy. Rosenblum transformed heavy bronze into a fluid, active figure. The critic Christine Temin described this sculpture as “the reverse of Bernini’s sculpture of Daphne metamorphosing into a laurel,” where the tips of Daphne’s raised hands transmute into tree branches, her toes sprout roots, and the strands of her hair turn into leaves. Conversely, Venusvine recalls a spirit bursting out of the earth, almost as if a group of sentient roots was twisted together into a human form. Embodying Rosenblum’s interest in the mysticism of nature, the sculpture exudes an animated aura that recalls cult deities.

Born in New Orleans in 1940, Rosenblum briefly attended three art schools: California School of Fine Arts, Cleveland Institute of Art, and Cranbrook Academy of Art. Rosenblum had solo exhibitions across the United States, including Allan Stone Gallery, New York; Howard Yezerski Gallery, Boston; Museum of Fine Arts, Boston; and Columbus Museum of Art, Columbus, Ohio. A major exhibition of his Chinese scholars’ rocks collection traveled to prestigious venues across the United States and Europe. Starting in the l990s, Rosenblum continued to explore themes of nature and heightened drama using digital photomontage. His studio was located in Newton Centre, MA, where he lived and worked until his death in February 2000.