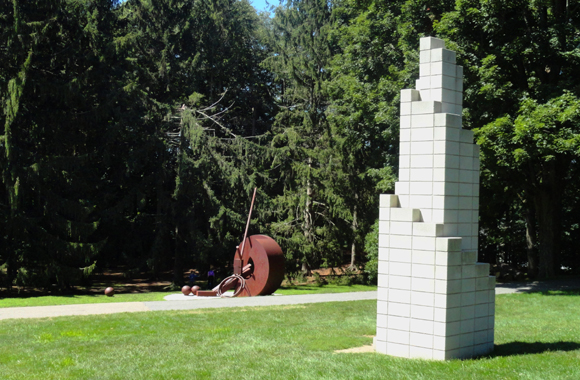 Sol LeWitt’s Tower (DC) was conceived in 1989 and installed on the grounds of deCordova Sculpture Park and Museum in 2009. The sixteen-foot sculpture, or “structure” to use LeWitt’s preferred term, seamlessly blends past and present building traditions. The design evokes ancient pyramids and ziggurats, which have a wide horizontal base and decrease incrementally as the structure rises. Built of modular concrete blocks, Tower (DC) also conjures associations with modern skyscrapers, which often use the same stepped architectural formation of these ancient precedents. The gradual unsheathing of the structure reveals its central core at the highest point, conveying a feeling of ascension.

LeWitt was a leading practitioner and theorist of the conceptual art movement that emerged during the 1960s. According to the artist’s pivotal writings on this new form of art making, the concepts behind the creation of a work of art are equally if not more significant than the aesthetic experience of the completed object. This approach radically challenged conventional understanding of both the process of creation and the unique status of a physical art object.

Working in a role he likened to that of an architect, LeWitt thoroughly planned his projects before realizing them himself or commissioning others to execute their final form. As with Tower (DC), his famous Wall Drawings have been installed in museums and galleries worldwide by assistants and volunteers following the artist’s instructions and diagrams. These drawings, consisting of combinations of lines, colors, and shapes, are inherently transitory, as they must be recreated each time they are displayed. By removing himself from the physical process of making his artwork, LeWitt questioned the importance traditionally allotted to the artist’s unique hand in the act of creation.

LeWitt has been the subject of numerous retrospectives including one organized by the San Francisco Museum of Art in 2000, which travelled to the Museum of Contemporary Art, Chicago, and the Whitney Museum of American Art, New York. “Sol LeWitt: A Wall Drawing Retrospective” opened to the public in 2008 at the Massachusetts Museum of Contemporary Art in North Adams, MA and remains on view until 2033. LeWitt’s work is part of major national and international museum collections including Tate Modern, London; Stedelijk van Abbemuseum, Eindhoven, Netherlands; Musée National d’Art Moderne, Centre Georges Pompidou, Paris; Guggenheim Museum and Museum of Modern Art, New York; and National Gallery of Art, Washington DC.