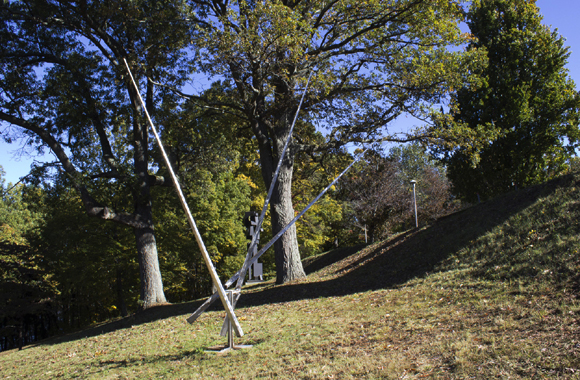 George Rickey began exploring movement in sculpture in the mid-1940s, and was a pioneer of the kinetic sculpture movement. Originally trained as a painter, Rickey made his first mobile while working as part of the Army Air Corps engineering team during World War II. He applied his interest in design and flow of air currents to his art, creating sculptures out of industrial materials that respond to the properties of wind and gravity. After military discharge he furthered his art education with funding from the G.I. Bill, continuing to experiment with kinetic sculpture while attending lectures by Buckminster Fuller and Naum Gabo at the Institute of Design, Chicago. Rickey was inspired by Alexander Calder’s mobiles but rejected his emphasis on organic, abstracted forms. Instead, Rickey used simple, geometric shapes as a means to create movement. His sculptures demonstrate an admiration for the machine’s beauty while also criticizing American rising consumerism and the planned obsolescence of consumer items. The artist stated that the decision to make machines that serve no practical purpose in such an environment “echoes the whimper of many a cog: ‘What is the use?’”

Three Lines is one of many large-scale sculptures that are part of the series Lines, consisting of two or more thin vertical blades that are gracefully activated by air currents. The artist stated that he used movement “as an expressive means, as a painter might use color.” Similar to the way in which a painter employs a brush to produce an arrangement on a canvas, the motion of Rickey’s blades produces dynamic “drawings in space.” In Three Lines, the swing of each blade differs in distance and speed when subjected to the same wind, creating an irregular movement that seems to challenge the laws and logic of physics. In reality, the blades’ activity is anchored by a highly ordered system. To create this effect, Rickey embedded of small amounts of lead unevenly into the slightly widened bottom of each stainless steel blade. The result is paradoxical: a highly controlled mechanical device that generates a rhythm intrinsically linked to the unseen environmental forces of wind, gravity, and inertia. The sculpture’s smooth, pendular motion evokes time-keeping devices such as metronomes and clocks, striking a delicate, mysterious balance as its tenuous blades stretch toward the sky.

George Rickey was born in 1907 in South Bend, Indiana. In 1913 he moved to Scotland with his family, where he attended Trinity College, Glenalmond, Scotland, and Balliol College, Oxford, earning an MA in European History. He also attended the Ruskin School of Drawing, Oxford, and the Académie Lhote, Paris. Rickey repatriated in the 1930s and served in the Army Air Corps from 1942-1945 before studying at the Institute of Fine Arts, New York University, University of Iowa, and Institute of Design, Chicago. He taught at various universities intermittently throughout his life. In 1960 he received the Guggenheim Fellowship, which was renewed the following year for his work with kinetic sculpture. Rickey’s art can be found in major international museums, including The J. Paul Getty Museum, Los Angeles, CA; Hara Museum of Contemporary Art, Tokyo, Japan; the Museum of Modern Art, New York, NY; The National Gallery of Art, Washington, D.C.; and Tate Gallery, London, England.

Listen to George Rickey and his son talk about the sculpture and the role of nature.