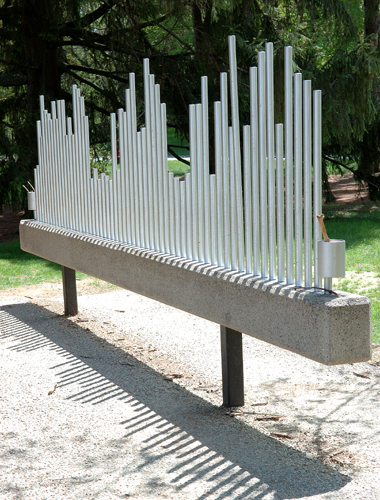 Using principles of mechanical design, American sculptor Paul Matisse builds interactive sculptures and environments that give participants ownership over the creative process. In 1963, he invented the Kalliroscope, a glass and steel device that demonstrates the scientific principles of how fluids move. Intersecting science and art, the work presents fluid currents as beautiful phenomena worthy of aesthetic appreciation activated by viewers. Swirling and changing repeatedly, the fluid exudes a meditative quality. Since the 1980s, Matisse has dedicated his time to designing public sound environments, including an interactive three-part musical sculpture for the Kendall Square MBTA station in Cambridge in 1987. Like his Kalliroscopes and other kinetic sculptures, this installation is activated by public participation demonstrating art’s potential to create community.

The Musical Fence is an interactive public artwork that combines sculpture and music. The sculpture was commissioned in 1980 by the Cambridge Arts Council and was one of two fences installed outside of the Cambridge City Hall. Despite its immense popularity within the community, the installation was taken down after forty days due to noise complaints. One of the fences was relocated to the Montshire Museum of Science in Vermont and the other was moved to deCordova, where it remains a visitor favorite as one of the few interactive sculptures in the Park. A concrete beam holds sixty vertical aluminum pipes, each equal in diameter but cut at different heights and thereby tuned to different notes. Due to the variety of its chimes, the fence creates an almost limitless number of sounds. Together, the pipes create an undulating form that visually conveys their sound sequence. According to Matisse, The Musical Fence “came out of my enthusiasm for being able to make music without having to know exactly how to do it.” People passing by compose their own melodies by running sticks along the pipes, promoting the interaction between artwork and landscape.

Matisse was born in New York City in 1933. After receiving his BA from Harvard University in 1950 and studying at the Harvard Graduate School of Design in 1954, he worked in new product development at Arthur D. Little, an international managing consulting firm. His invention of the Kalliroscope launched his art practice. Since 1980, he has engineered multiple interactive sound environments that allow the public to make music in public venues across the United States. His work has been shown at the Metropolitan Museum of Art, NY; Museum of Modern Art, NY; the Institute of Contemporary Art, Boston; and museums and galleries in Europe and Japan.

Listen to Paul Matisse and Pamela Worden, former director of the Cambridge Arts Council, talk about the sculpture.