The Endangered Species of New England 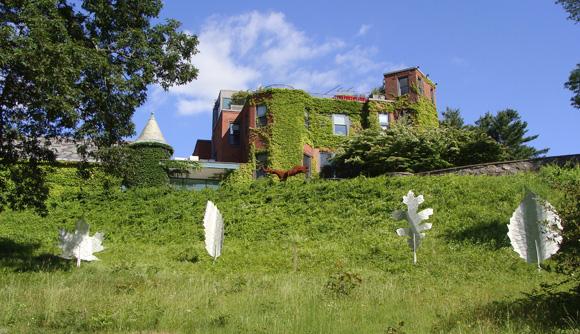 Environmental Art pioneer Alan Sonfist creates site-specific earthworks that probe the relationships between humans, nature, and the fragility of the world they share. Since the 1970s, Sonfist’s sensitive landscape interventions have breathed new life into delicate urban ecosystems, returned damaged green spaces to their pre-industrial age glory, and created new habitats for endangered flora and fauna. Sonfist is perhaps best known for Time Landscape (1978-present), a forested 24 x 400-foot plot of land in lower Manhattan that mimics how the landscape of present-day New York would have looked in the early 17th century, when the first Dutch settlers arrived.

In line with past preservationist gestures, Endangered Species of New England is an outdoor installation created specifically for the deCordova Sculpture Park. It began, in 2011, with the installation of four larger-than-life aluminum leaves that serve as signposts for a very real threat in our region—the potential extinction of several of New England’s most beloved native trees: the American Beech, the American Chestnut, the Burr Oak and the Sugar Maple. These sculptural leaves are totems of both warning and reverence for the trees that are silently disappearing around us.

Sonfist’s leaves are more than commemorative objects. They honor their species with time capsules buried beneath each sculpture. The individual capsules contain the seeds for the tree symbolized directly above, thus protecting the legacy and future growth of the indigenous trees of New England and all living creatures who depend upon them for survival.

In early October of 2012, the second phase of this project was completed when the sculptural leaves were joined by a large cobblestone outline of an Eagle (an endangered species from the region). In May of 2013, the work was completed when the interior of the cobblestone outline was planted with Inkberry Shamrock, a native species that will provide food and habitat for many different kinds of native birds, mammals, and insects on the deCordova campus.

Alan Sonfist studied at Ohio State University before receiving his MA in Art from Hunter College, NY. His works can be found in the collections of the Metropolitan Museum of Art, the Dallas Museum of Art, the Princeton University Museum, the Museum of Modern Art – New York City, the Whitney Museum, and the Ludwig Museum in Aachen, Germany. Sonfist has received major grants or awards from the National Endowment for the Arts, the Graham Foundation for Art and Architecture, the Chase Manhattan Bank Foundation, and the U.S. Information Agency.

Listen to Alan Sonfist talk about this artwork and the value of environmental art.