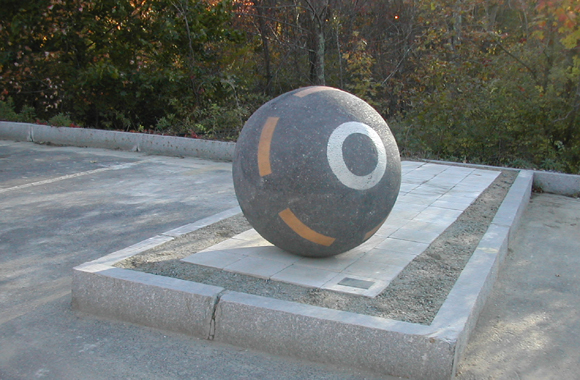 Since 1995, Lars Fisk has reimagined familiar and common-place objects into spheres, which he considers a “basic form… that we can all understand, but is at the same time the least likely form for these subjects to assume.” Fisk uses the sphere as a formal framework to compare vastly different objects, including a tree, a tractor, a school bus, and even the deCordova Museum road. He explains: “I want to find how we might recognize something by seeing it for what it is not.” Transforming objects in this way engenders a fascination with the mundane and elevates otherwise unnoticed details of one’s everyday surroundings to works of art that demand attention. Full of potential energy, the balls call out to those passing by, as if asking to be played with. This grants the sculptures elements of humor and whimsy that differentiate them from what Fisk describes as “stiff” conceptual art pieces housed inside museums.

Located on a platform at the bottom of the parking lot is Fisk’s Street Ball, one of his early explorations into the sphere. Here, Fisk takes the road, which is linear and planar, and transforms it into its antithesis: a sphere. Even in its compacted and altered form, the “street” still retains elements of its original iteration, namely the color, texture, and painted markings. Complete with asphalt and solid white and dotted yellow lines, the sculpture is immediately recognizable for its resemblance to a street, but odd in its failure to appear exactly as expected. Fisk’s work with roads and vehicles grew out of an interest in traveling along interstate highways. More specifically, he wished to understand the phenomenon of daydreaming while driving. Fisk observed how drivers manage to navigate the road without absorbing their surroundings, as they allow their minds to wander elsewhere. In response, he aimed to draw the daydreamer out of his or her reverie by providing a refreshing perspective on an otherwise mundane experience.

Though born in Lebanon, NH in 1970, Fisk attributes much of his success to his experience of living and working in Burlington, VT. He received a BA from the University of Vermont (UVM) in 1993 and a MFA from Columbia University in 2005. After graduating from UVM, Fisk became the first art director of Seven Days, an independent weekly publication from Vermont that covers everything from politics to art to food. Around the same time, he became involved with Phish, an American rock band founded at the University of Vermont in 1983. Through this, he experimented with performance art and set design, which fostered his interest in installation art. In 2002, Fisk was awarded the third annual Rappaport Prize, an award administered by deCordova to an artist in recognition of his or her significant achievement and creative potential. His work has been featured at museums and sculpture parks across New England and New York, including Socrates Sculpture Park, and MoMA PS1. Most recently, he held a solo exhibition at the Marlborough Chelsea gallery in New York City titled “Mr. Softee” (2016), which featured twelve balls intended to represent an entire street as a contained sculptural object. Today, Fisk lives in Brooklyn where he calls four storage containers, stacked two by two, home.