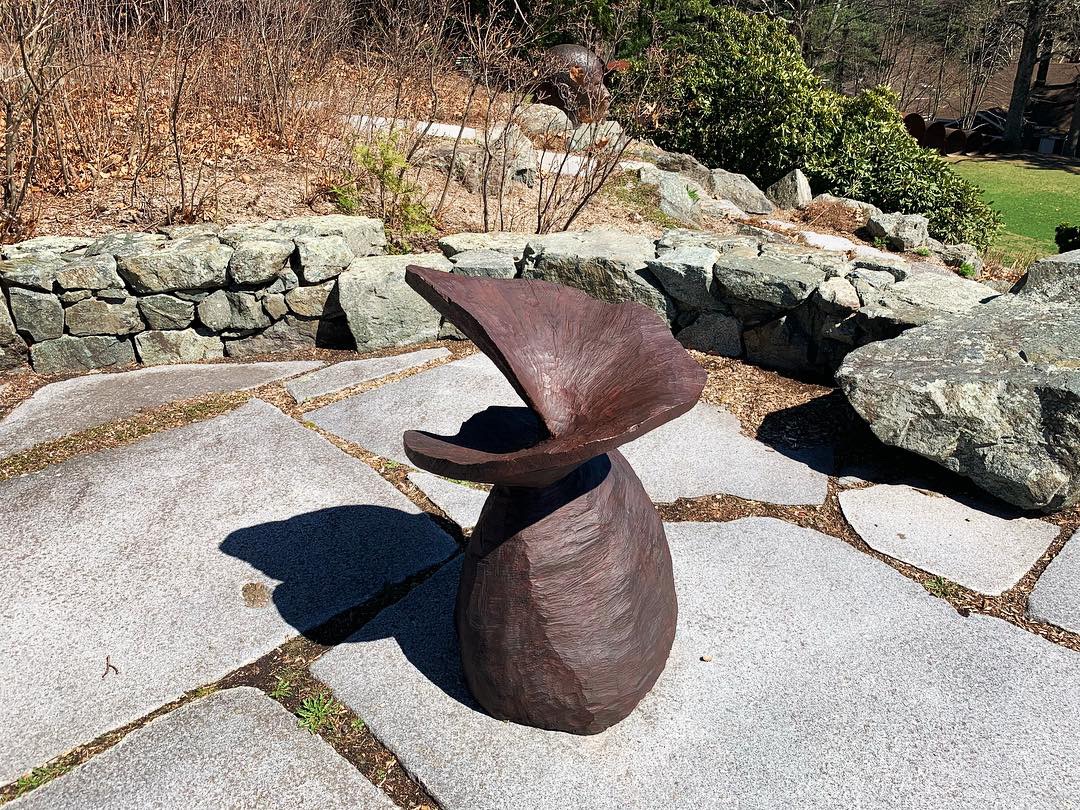 Nash is a sculptor and Land Artist, making use of natural materials and the landscape as his primary mediums. He is known for carving and charring wood from trees that have fallen or been felled due to disease or age. Retrofitting a defunct chapel in North Wales in 1968 to serve as his home-studio allows Nash to work on a grand scale surrounded by his works-in-progress, and to work close to nature.

“I don’t invent anything,” Nash says, adding, “I like thinking that I simply ‘find’ things.” The unseasoned surfaces of his works may bear splinters, knots, or other traces of growth and decay. Some of his sculptures are purely abstract or geometric, while others evoke furniture or totems. In 1978, Nash began making one of his best-known sculptures by accident as he was trying to transport a large wooden sphere to his studio by floating it down a river. Four decades later, Wooden Boulder still exists as a “free range sculpture,” as Nash calls it, documented and greeted by local residents as it travels by water through the Welsh countryside.

Over the past decade Nash began casting bronze sculpture, either in primary forms such as spheres, cubes, and pyramids, or—like Spiral—in imitation of his pre-existing wooden sculptures. Nash consciously invokes earth, water, fire, and wind when transforming his wooden sculpture, as he floats them down a river, chars their surface, or leaves them in the elements for decades. His incorporation of bronze casting as part of this practice continues themes of change, decay, and alteration, especially as he melts and solders metal. As some of Nash’s early wooden works begin to decay naturally, bronze versions offer a method of preserving their forms for posterity, while not interfering in the original wooden objects’ physical conditions.

Nash studied at Kingston College of Art (1963-1965) and Chelsea School of Art (1969-1970). He has had solo exhibitions at Fukuoka Art Museum in Japan, Galeria Alvaro Alcazar in Madrid, Galerie Lelong in Paris, Kunsthalle Mannheim in Germany, and the Royal Academy of Arts in London. His work has been included in group exhibitions such as The Condition of Sculpture (1975) at the Hayward Gallery in London, British Art Now: An American Perspective (1980) at the Solomon R. Guggenheim Museum in New York, and Sculptors’ Drawings 1945-1990 (1995) at the Metropolitan Museum of Art in New York. Nash’s work is in institutional collections including Centre Pompidou (Paris), Metropolitan Museum of Art, Museum of Contemporary Art (Tokyo), Museum of Modern Art (New York), National Museum of Contemporary Art (Seoul), the Solomon R. Guggenheim Museum, Art Gallery of Western Australia (Perth), Tate Gallery, and Victoria & Albert Museum. Nash was elected a Royal Academician in 1999 and was awarded OBE (Officer of the Order of the British Empire) for his service to the arts in 2004.