Requiem for the 20th Century 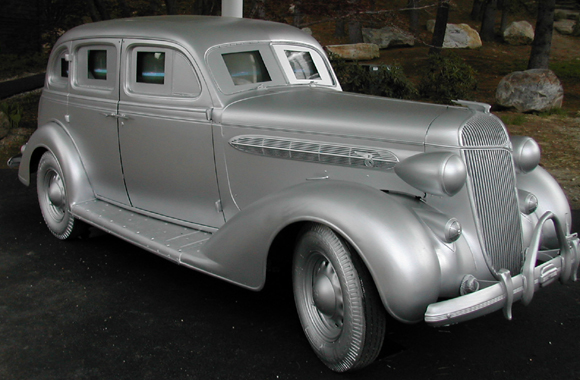 Please Note: Requiem to the 20th Century is currently off view for conservation.

In the 1960s, Nam June Paik pioneered art experiments that merge art and technology, and is often referred to as the “father of video art.” As the television became a common commodity in American households, he was one of the first artists to incorporate video into his sculptures. Paik famously coined the term “electronic superhighway” in reference to the immediacy of information dissemination made possible through television. His exploration of technological advancements served as political commentary on how they were affecting individuals’ everyday lives. Paik covered a wide range of artistic media, including film, sculpture, and sound, in multisensory works of art.

A rare outdoor work, Requiem to the 20th Century, Nam June Paik creates a harmony between art, music, and technology. The work pays homage to the rise of two predominant inventions of the last century: the automobile and the television. A silver-painted 1936 Chrysler Airstream sedan is immobile, with the engine removed and windows obstructed. The artwork alludes to the car manufacturing industry in the United States—another significant development of the century. A continuous loop of video clips runs on screens set in the windows of the car: a figure and a silhouette dancing around a white backdrop, pixelated color, psychedelic patterns of bright colors, and short clips from 1990s television performances. Mozart’s final and unfinished work, Requiem Mass in D minor, K.626, emanates quietly from speakers inside the car, seemingly disconnected from the action occurring on the monitors. Enshrined as a silver reliquary, Paik’s multimedia sculpture fuses an eighteenth-century classical composition, vestiges of twentieth-century technology, and a vintage symbol of American automotive engineering into an engaging and dream-like installation. Requiem to the 20th Century addresses the transformation from the industrial to the information age, grappling with our complex and challenging relationship to new technologies.