Born in 1950, London, United Kingdom
Lives and works in London 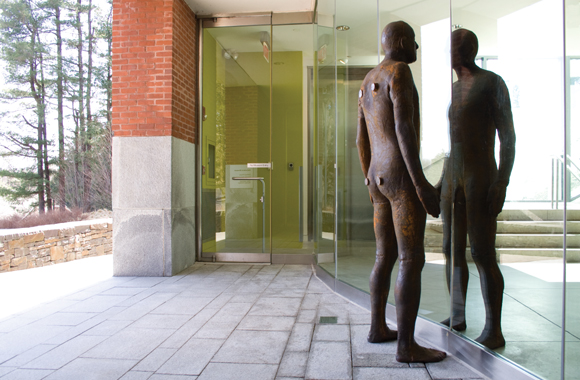 Antony Gormley is a British sculptor known for his figurative work, including full-length iron casts of his own body. These sculptures explore the experience of living in a human body, both in terms of internal properties of the body such as consciousness and identity, and external relationships between the body and its environment. Early in his career, Gormley experimented with diverse materials, including bread, wood, glass, and clothing, often leaving impressions of his body in these materials. Since he first cast his own body in the early 1980s, he has worked extensively with multiplications of his casts. Gormley has populated cities and coasts with his altered replicas, found innovative ways of placing his forms in architectural spaces, and abstracted his forms beyond recognition. His work adds a new conceptual richness to the tradition of the human form in sculpture.

Reflection II is comprised of two 1,600-lb iron casts of the sculptor’s 6-foot-3-inch body facing each other on either side of an expansive glass wall next to the entrance of the museum. One figure stands outside while the other confronts his counterpart from the inside. Their arrangement transitions the viewer from the outdoor sculpture park to the indoor galleries, echoing the deCordova’s mission of combining outdoor sculpture with the indoor museum experience. The repeated images cause momentary confusion; are the sculptures doubles or reflections? This placement plays with the concept of internal / external, both in terms of the architectural space (indoor versus outdoor), and the identities of the figures, the sculptor and the viewer (self versus other). The architectural barrier of the building defines the sculpture, making it an image of alienation.

The ridged nude male figures are traces of the artist, but they transcend his likeness and identity. They are not self-portraits. Gormley separates himself from his casts by purposely leaving evidence of their molten formation. Their iron surface has a rough texture and is cast in hues of charcoal grey and rusty orange, with ridges running down their sides like long veins, and four round nubs on each that are vestiges of the casting. The casting process also plays with interior versus exterior distinctions, as the sculptor is first covered with plaster, and then lets the plaster harden before separating himself from the mold. Iron is poured into the hard shell, forming the interior figure—a generalized form of the artist at a specific time. The resulting sculptures for Reflection II are uncannily still and tense, standing with feet apart and arms at their sides, their blank gazes fixed only on the other. The close placement of the mirrored figures and their focused stare force the viewer into the position of the outsider. Ultimately, the sculpture brings attention back to the viewer’s own body and navigation through space. This sculpture belongs to a series of three, including an artist’s proof, and the deCordova’s acquisition is the only one in a public collection.

Antony Gormley studied archaeology, anthropology and the history of art at Trinity College, Cambridge. After three years in India, he trained to be a sculptor at Central School of Art, Goldsmith’s College and the Slade School of Art. He received the Turner prize in 1994. Gormley has completed major installations in England and abroad. Another Place, his permanent installation of 100 iron cast figures, populates two miles of Crosby Beach in England. Event Horizon, an installation of 27 to 31 casts, was installed in London in 2007, and is in New York City from March through August, 2010. The natural and urban locations provide completely different experiences of man’s integration with the environment.

Listen to Antony Gormley and George Hagerty, art handler and installer, talk about the sculpture.

Born in 1950, London, United Kingdom
Lives and works in London