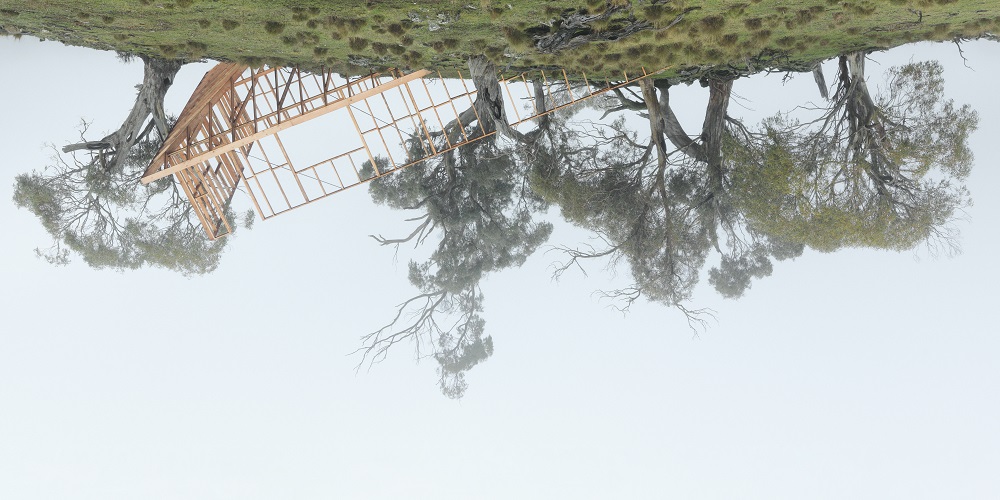 The newest iteration of the PLATFORMS Billboard series features Prowse by photographer Rosemary Laing, an Australian artist known for her cinematic approaches and lack of digital manipulation of her photography.

For Prowse and other photographs from her 2010 series leak, Laing stages an oversized, upside-down house frame throughout New South Wales where she witnessed the disappearance of landscape vistas to suburban development projects. Her interventions – which take weeks to prepare and install – explore the tension between what was versus what remains; the grounds’ literary and visual histories; as well as land ownership, the displacement of Indigenous peoples, and environmental degradation. Aptly titled, the works within leak reflect the trickling, oozing, uncontrollable effects of one action upon the world.

Prowse presents a topsy-turvy view of a sheep farm in the Cooma-Monaro region of New South Wales, the traditional lands of the Bidhawal, Walgalu and Ngunnawal peoples. Mimicking the invasive nineteenth-century campaigns of British colonizers to this area, a timber house frame crashes into the natural, remote hillside. The bare-boned, wooden structure not only mirrors the region’s ubiquitous pastoral fencing and sprawling housing developments, but it also identifies common architectural modes of land delineation. The resulting ‘visual crash’ evokes the historical, violent collision between foreign colonial powers and native peoples, as well as the continuing intersections of the past and present, and manmade and natural environments.

Further revealing the land’s deep cultural stratigraphy, Laing entitles each work in leak after characters from Patrick White’s 1979 novel The Twyborn Affair, which was inspired by and takes place in Monaro. It follows characters, like the sheep farmer Prowse, as they create their identities through relationships with others and their “homeland.” Through its subtle, layered symbolism, Prowse illuminates the unknowing ties between ourselves, others, and nature.

PLATFORMS is a series of one-person commissioned projects by early- and mid-career artists from New England, national, and international art communities that engage with deCordova’s unique landscape. The PLATFORM series lets artists expand their practice and visitors experience new approaches to contemporary sculpture and public art.