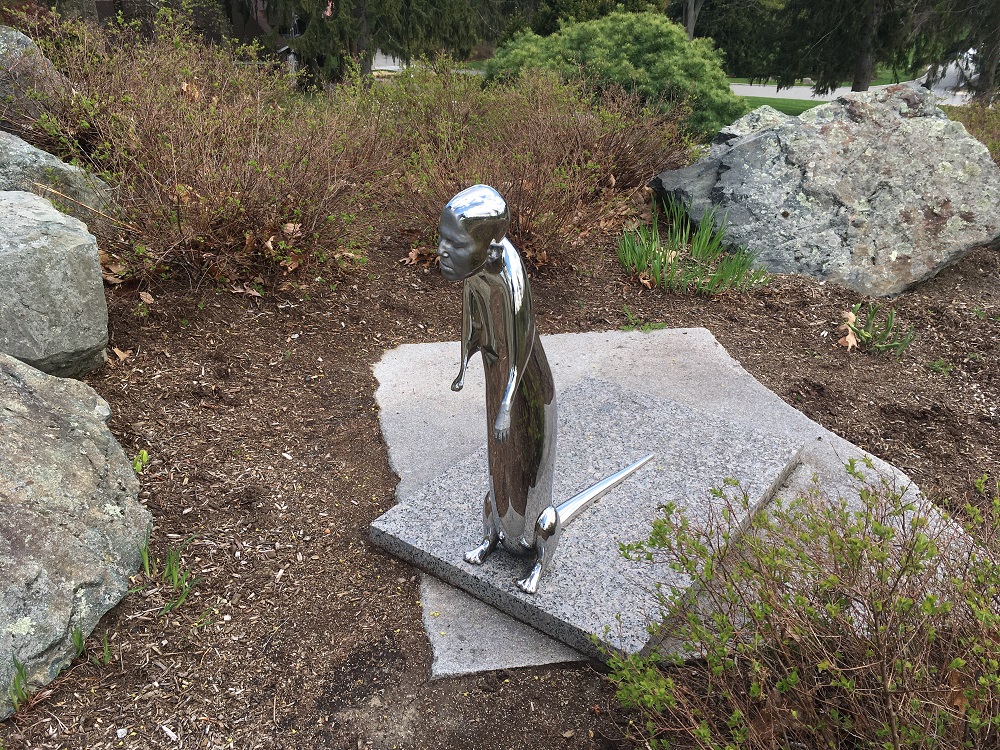 Rona Pondick’s sculptures often combine elements of the natural world with parts of the human body. In much of her recent work she grafts animals and humans into a seamless being, creating new fantastical creatures. Human and animal combinations have occurred throughout the history of art, mythology, and literature, in creatures such as the ancient Egyptian sphinx, which is comprised of a feline body and human head, and the mermaid, which is half human and half fish. Pondick draws from these historic traditions, but also introduces new meanings since her hybrids are also self-portraits. Over the course of her career Pondick has created hybrids from dogs, monkeys, trees, and other forms.

In Otter Pondick has morphed the body of a standing otter with a naturalistically rendered human head. The head is a self-portrait of the artist cast in stainless steel. Shrunken to fit atop the otter’s shoulders, the head tilts to the side and stares pensively into the distance. The otter has also had one of its paws replaced with a cast of the artist’s hand. While the human and animal elements merge into one body, they also retain their distinctness from one another through different textures. The otter’s body has a smooth, highly polished finish, while the human components retain the detailed texture of hair and skin. These differences in texture reinforce the play between real and fantasy, the parts and the whole. The strange and occasionally unsettling combinations produced in Pondick’s sculptures recall the Surrealist movement in the way that they conjure creatures that exist only in dreams or the subconscious.

Pondick creates her work with modern materials and technology, including 3D computer scanning and modeling. Her hybrid sculptures thus address contemporary issues and raise questions about genetic engineering, possible life forms yet to be created, and mankind’s tenuous connection to the natural environment.