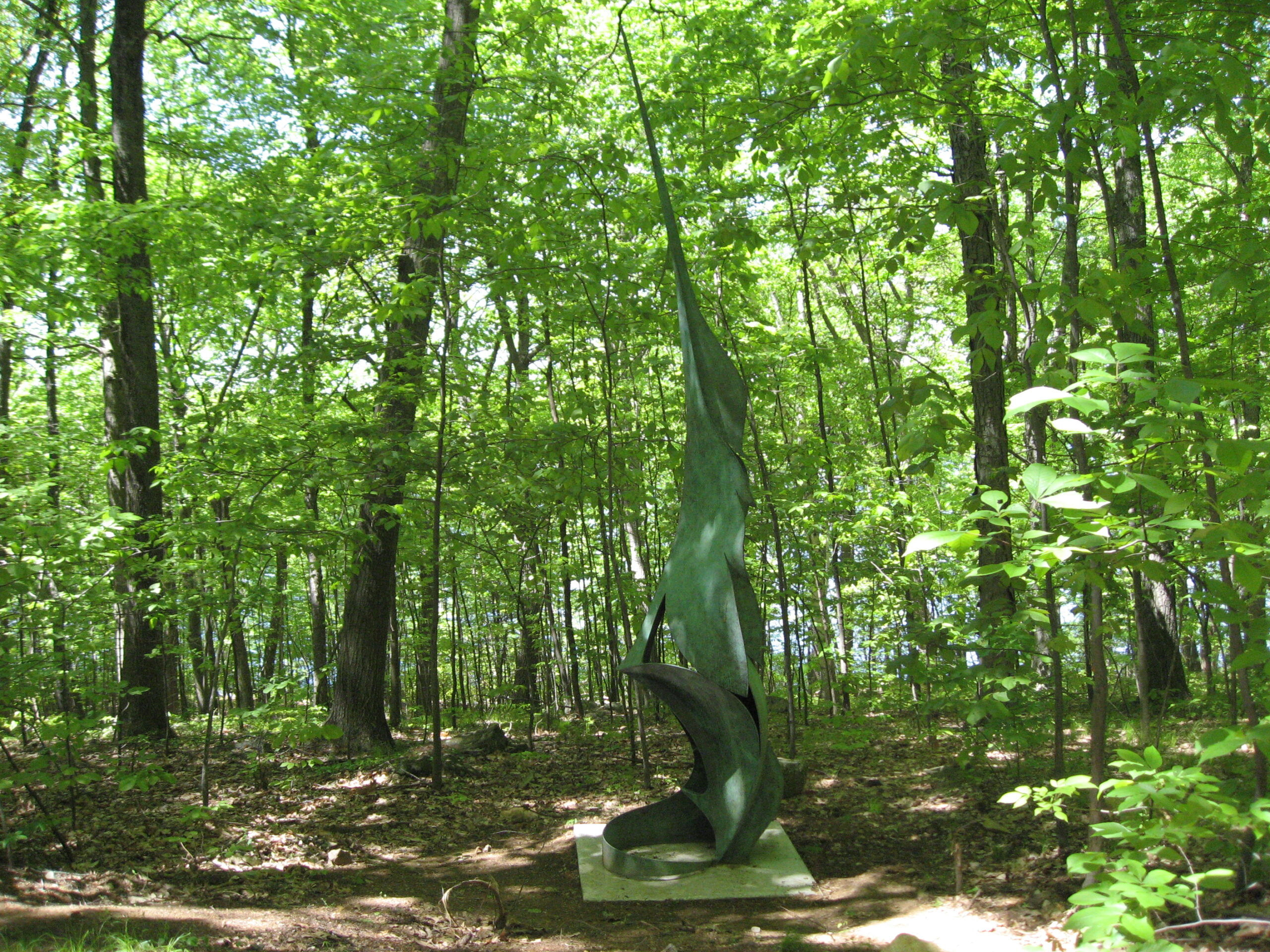 John Raimondi’s monumental sculptures range from rigidly geometric to amorphous abstractions of plants and animals that are solid in form, yet fluid in movement. After observing the American eagle’s disappearance from the shores of Cape Cod, Raimondi began to carve rare and endangered animals. In doing so, he hoped to draw attention to wildlife preservation, believing that people would want to protect these disappearing species if they admired them. Rather than create exact likenesses of animals, Raimondi designs sculptures intended to evoke their spirit in the abstract. He compares his creative process to conducting a symphony, in which “the message is universal; [Tchaikovsky’s] music can be played in any country; it is warm, delightful, alive; there are no lyrics. The composer assembles forms and shapes. Sculpture, too, is an emotional experience. It is visual, yet, as with music, there is no need to intellectualize. I want my art to be very emotional.”

Lupus, Latin for “wolf,” is one in a series of ten stylized wolf sculptures made by Raimondi that demonstrates his exploration of the visceral, spiritual, and formal aspects of wild animals. Like a baying wolf seated on its haunches, the sculpture strains skyward but remains fully grounded. While the wolf’s head and neck extend upwards to form a point, its mane and body consist of curving planes that twist through space. Before sculpting Lupus, Raimondi spent nine months studying wolves and drawing them from life. During this time, he aimed to better understand their behaviors and personalities. As inspiration, he cites the Aesop fable in which an underfed wolf meets a well-fed dog and is invited to share a meal. Though tempted to eat the food, the wolf learns that it comes at a cost; every night, the dog is tied up, leaving rope burns on its neck. Hence Lupus adresses the plight of endangered species while questioning whether freedom and security can coexist.

Raimondi was born in Chelsea, MA, in 1948 where he and his family ran a hobby shop. There, he became fascinated with building models of automobiles and airplanes, which evolved into an interest in sculpture. Since receiving his BFAfrom the Massachusetts College of Art in 1973, Raimondi has continuously worked on large-scale public sculpture projects. He has exhibited in more than thirty states across the country, and internationally, and can be seen in many public art collections, including the Museum of Fine Arts, Boston; the National Museum of American Art at the Smithsonian Institution, Washington DC; and the Portland Museum of Art, Portland, Maine.