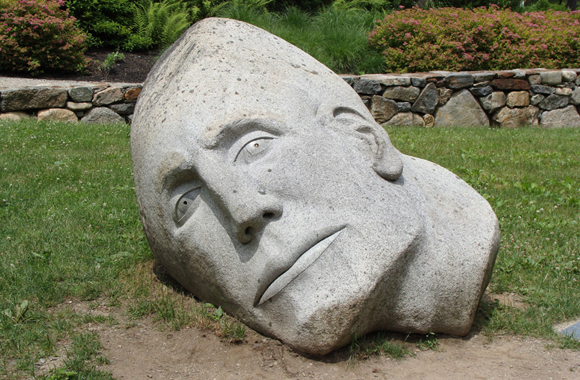 As a sculptor, Joseph Wheelwright collected and carved natural materials, such as branches, roots, and stones. He was often inspired to see the figurative within these found objects, adding and embellishing features where necessary. He is best known for collecting large boulders that had the potential for transformation, and carved them into human forms. Wheelwright’s technique of direct carving built on the legacies of twentieth-century artists, such as Constantin Brancusi, whose elegant sculptures included semi-abstract, disembodied heads. Wheelwright, however, was not necessarily looking for objective abstraction in his sculptures, but to soften rock into gentle expressions of humanity.

Listening Stone was created especially for deCordova’s Sculpture Park. Wheelwright chose a giant granite rock from a construction project on the property and shaped it into an oversized head with clearly recognizable features. The title of the stone aptly describes the piece, as the head’s right ear appears to be attuned to the subtle sounds emitted from the earth below.

Wheelwright earned a BA from Yale University and an MFA in sculpture from Rhode Island School of Design. He exhibited his sculptures widely in New England and nationally. The artist completed a number of public commissions, the best known being Sleeping Moon, at Peabody Square, Dorchester. Wheelwright was closely connected to the Boston art community and was a founding member of the Boston Sculptors Gallery and the Humphrey Street Studios in Dorchester. He was also a long-time teacher at deCordova.