Gift of the Artist, in Memory of his Father & Mother 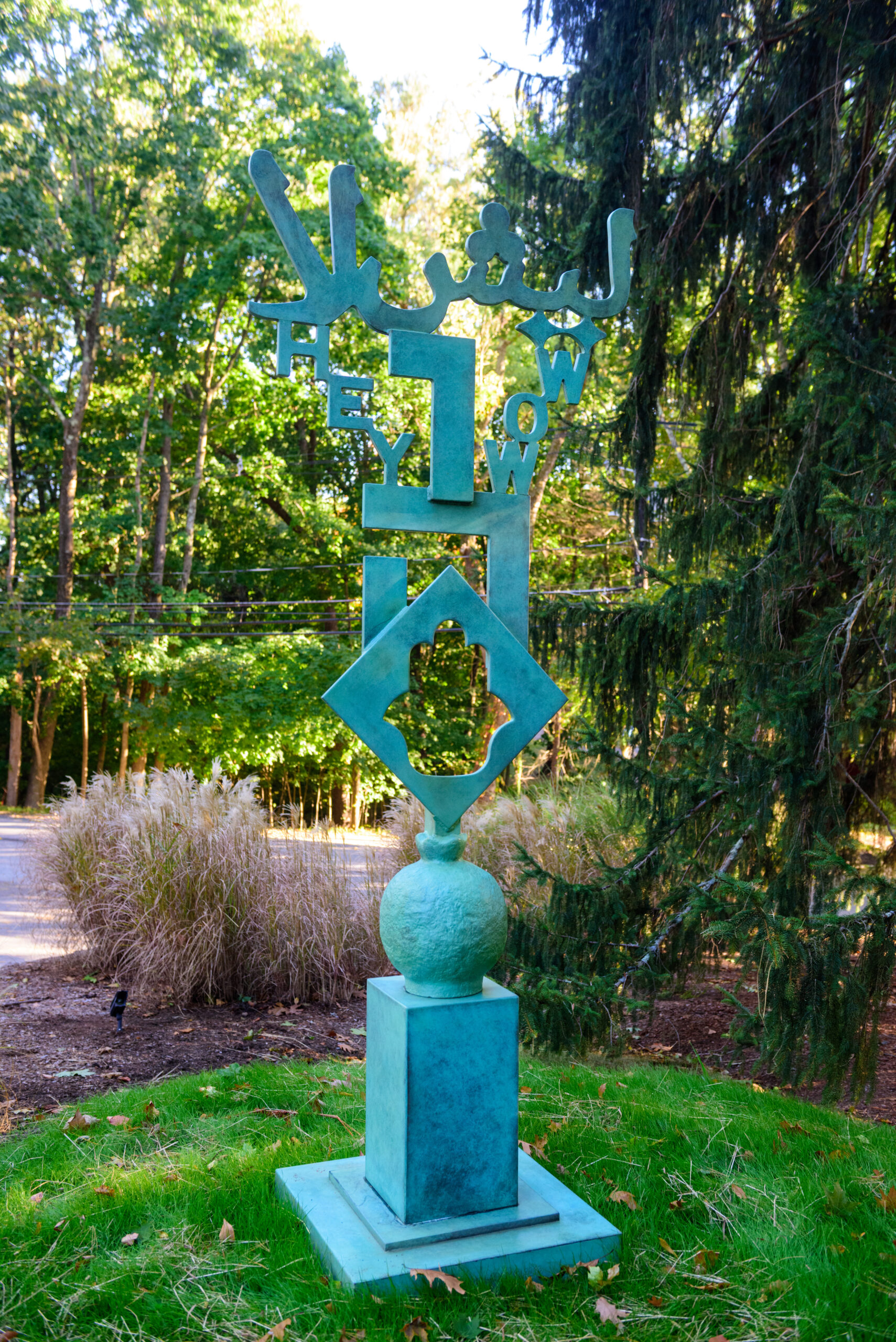 The iconography of Oded Halahmy’s dynamic sculptures derives from the beauty of the places he has lived: Iraq, Israel, and the United States. Halahmy refers to his native Iraq as the “land of wheat, barley, grapes, figs, pomegranates, olives, and dates.” Working primarily in wood and bronze, he employs an expansive visual language developed throughout his sixty-year career that includes doves, palm trees, pomegranates, crescent moons, and temple architecture, as well as the alphabets of Hebrew, Arabic, and English. His color palette derives from historical art of the Middle East: deep blues and reds and the green patina of aged bronze.

The layered symbols of Lesh Lah are personally significant for the artist, but also evoke universal notions of multiculturalism, wonder, and exuberance. The Arabic script crowning the sculpture is pronounced lesh lah, meaning “why not?” Although Halahmy’s ancestral paths—Orthodox Judaism and Arabic culture—have been at war for the past century, why not, he asks, bring them together in a carefully balanced dialogue? Below, the Hebrew word avah, meaning “wow,” is surrounded by English-language exclamations, “HEY WOW.” The phrase is also part of the Hebrew children’s alphabet song, “Alef Bet,” rooting the sculpture in Halahmy’s early memories of Baghdad.

The letters rest on a hamsa, a hand icon that appears throughout the Middle East and North Africa and has historically been used in both Islam and Judaism to ward off the evil eye. It often appears as a modest-sized amulet, but here Halahmy rendered it on an enlarged scale. The images and words in the sculpture appear to sprout from the crown of a pomegranate. The pomegranate, which Halahmy recalls relishing during his childhood in Iraq, is cherished for a range of significances in cultures from ancient Greece to Iran, Turkey, and beyond. He describes the pomegranate as “an ancient and universal symbol of love, fertility, prosperity, beauty, hope, life, and rebirth.” Thought to have grown in the Garden of Eden, the pomegranate is one of the four holy trees in Islam. The Torah lists the pomegranate as one of the seven species of Israel and many Torah scrolls are crowned with pomegranate-shaped ornaments. Halahmy’s joyful intermingling of symbols is a reminder that historically, Jews and Arabs contributed to a single culture with shared values and cohabitated harmoniously. Is this achievable once again? Why not—Lesh Lah?

Oded Halahmy (born in Baghdad, 1938) is a Babylonian Jew whose family fled Iraq in 1950, settling in Jaffa, Israel. He studied at Saint Martin’s School of Art in London, UK from 1966-1968 alongside artists such as Gilbert and George. He taught at Ontario College of Art from 1969-1970 before moving to New York City. He also taught at Parsons School of Design and held visiting positions at the Cooper Union and New York University. Halahmy’s work has been the subject of solo exhibitions at the Aldrich Contemporary Art Museum in Ridgefield, CT; Louis K. Meisel Gallery in New York, NY; Yeshiva University Museum in New York; and The Bronx Museum of the Arts. His work is in the collections of the Aldrich, the Solomon R. Guggenheim Museum in New York, the Hirshhorn Museum and Sculpture Garden in Washington, D.C., the Israel Museum in Jerusalem, and the Jewish Museum in New York, among others. He splits his time between New York and Jaffa, Israel.

Gift of the Artist, in Memory of his Father & Mother