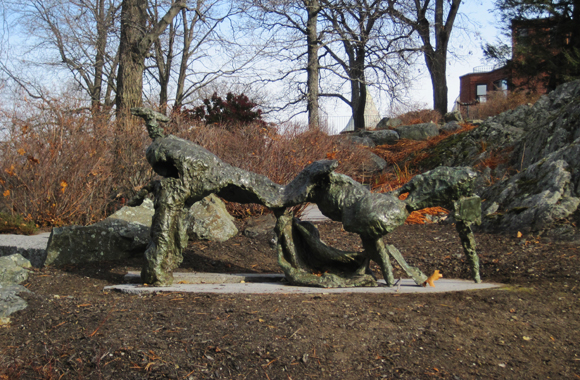 Drawing on subject matter from Greek and Roman mythology, Reuben Nakian is best-known for his semi-abstract bronzes characterized by their expressionist form. At the age of thirteen, Nakian began studying art and making stylized sculptures of animals and realistic portrait busts, including a series on President Roosevelt and his cabinet members. It was not until the late 1940s that he began creating his signature, large-scale bronzes. Influenced by the painters Arshile Gorky and friend Willem de Kooning, Nakian adopted a more abstract expressionist sensibility. His process started with two-dimensional gesture drawings that rapidly captured his ideas. He then created terracotta molds based on the sketches that preserved their dynamic and gestural qualities when cast in bronze. The malleability of terracotta allowed him to highlight the drama and emotion behind his mythological subjects, which included Leda and the Swan, the Rape of Lucrece, Hecuba, and the Birth of Venus. Unlike common representations of classical antiquity, which emphasized the creation of balance and elegance, Nakian’s sculptures exude an erotic frenzy similar to de Kooning’s paintings of women. This modern adaptation and abstraction of classical figures granted Nakian’s subjects a renewed relevance as conveyors of human emotions, such as love and passion.

La chambre à coucher de l’empereur, which loosely translates as “The Emperor’s Bedchamber,” alludes to the Emperor Napoleon and his wife Josephine in a passionate embrace. Though the sculpture is welded into a single, continuous piece of bronze, Nakian utilizes three visual vocabularies to distinguish the bodies, bed linens, and bed frame. Broad, twisting sections of the sculpture indicate the curves of human bodies as their limbs intertwine. The bed linens are rendered with greater detail where the bronze thins and falls from the bodies in crisp folds. Lastly, Nakian depicts the bed frame through the addition of flat, rectangular sections that lift the bodies of the ground. Abstract and monumental, the amorphous blend of figural elements creates the illusion of passing time condensed into a single moment.

Nakian was born in College Point, NY, in 1897. From 1917 to 1920, he studied at the Art Students League, NY, where he became an apprentice to Art Deco sculptor Paul Manship. Nakian received awards from the Connecticut Commission on the Arts (1979), Brandeis University (1977), and the Rhode Island School of Design (1979), in addition to two honorary doctorates, two fellowships, and two medals for his sculptural work. Nakian’s work is represented in permanent collections and sculpture gardens across the United States, including the Museum of Modern Art, NY; Metropolitan Museum of Art, NY; The Whitney Museum of American Art, NY; Hirshhorn Museum and Sculpture Garden, D.C.; Smithsonian Institution, DC; Solomon P. Guggenheim Museum, NY; Los Angeles County Museum of Art, LA; High Museum of Art, Atlanta, GA; Milwaukee Art Museum, WI; Walker Art Center, Minneapolis, MN; and the Minneapolis Sculpture Garden, MN. He gained international recognition after representing the United States in the VI Bienal in Sao Paulo, Brazil (1961) and the 1968 Biennale in Venice, Italy.