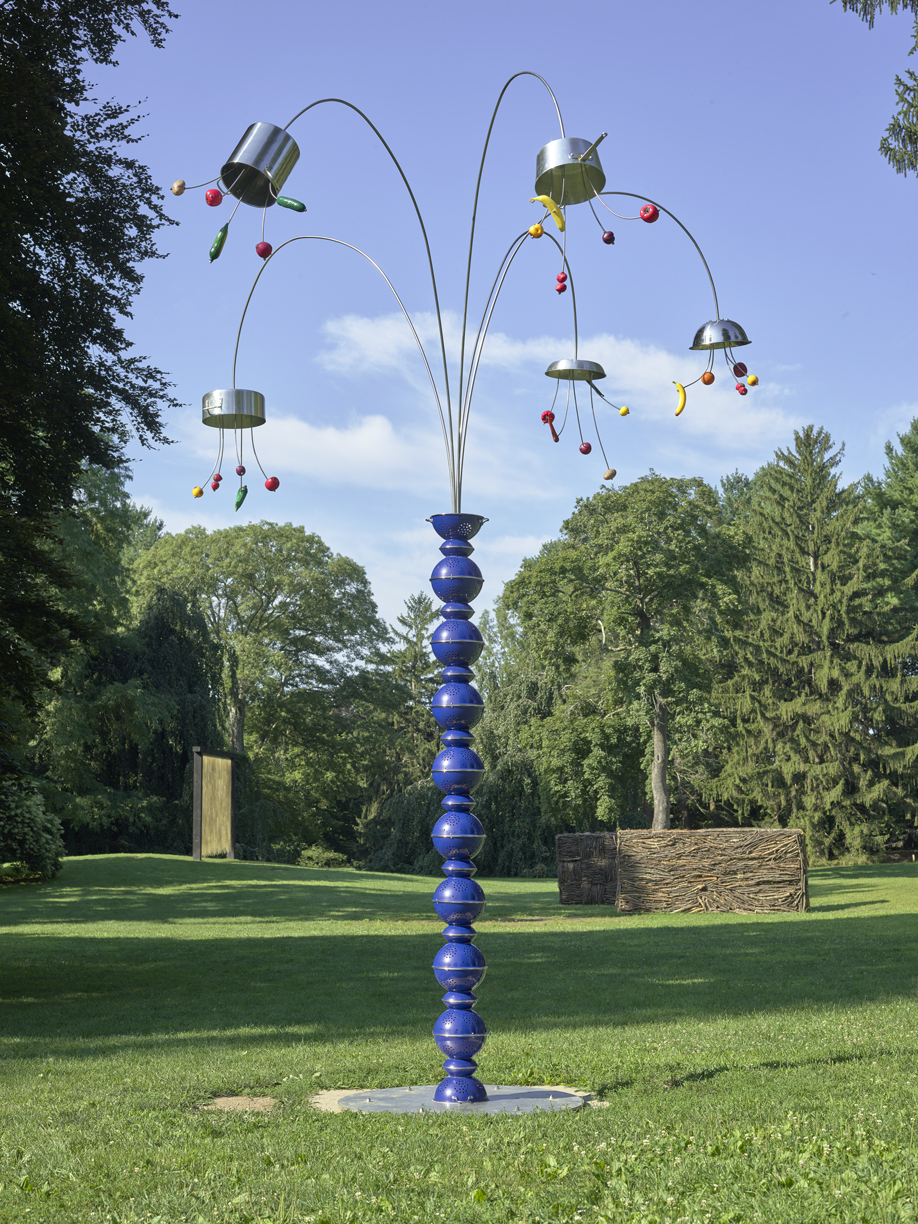 The three central themes informing Wurtz’s output over the past five decades are sleeping, eating, and keeping warm. Wurtz composes sculpture from objects in his everyday life, such as socks, plastic bags, and aluminum trays. By re-working industrially manufactured commodities into art, Wurtz alters the status of these objects, in the lineage of Marcel Duchamp’s “readymades.” He also shares with many Pop artists an ambivalent humor about the overproduction of cheaply-made, single-use goods. Posing a challenge to consumerist desire, he invites viewers to contemplate something they might otherwise ingest or discard without a second thought. Despite Wurtz’s preference for humble materials, his works take on delicate, poetic qualities evoking the modernist mobiles of Alexander Calder, as well as more recent assemblage sculpture by Mike Kelley, Sarah Lucas, and Noah Purifoy.

Kitchen Trees is one of Wurtz’s first large-scale, public sculptures. Its trunk is composed of blue colanders stacked in a slender column with thin metallic branches leading to overturned pots and pans, out of which plastic fruits and vegetables appear to fall. The sculpture’s form is partially inspired by the bulbous bronze fountain in New York’s City Hall Park where Kitchen Trees was first displayed alongside four other sculptures from the same series. And yet, Wurtz’s tree inverts the seriousness of such civic monuments, as its spindly branches vibrate in the wind and evoke the spray of the fountain’s jets. Here at deCordova, the whimsical piece evokes a tropical palm tree, in striking contrast to the towering pines and elegant beeches that thrive in New England.

Born in Pasadena, California, Wurtz earned a BA from the University of California at Berkeley and an MFA from California Institute of the Arts. He has had solo exhibitions internationally, most recently at Metro Pictures, New York (2018); Institute of Contemporary Art, Los Angeles (2018); La Casa Encendida, Madrid (2016); and Baltic Centre for Contemporary Art, Gateshead, UK (2015). He received grants from The Pollock-Krasner Foundation (2012) and the National Endowment for the Arts (1984), among others. His work is held by collections such as the Art Institute of Chicago; the Portland Art Museum, Oregon; and the Speed Art Museum, Louisville.