A primary reason for deer hunting at Trustees properties is to reduce and control the deer population and thereby improve the overall habitat health of our properties and surrounding areas. With few natural predators in the region, and an urban environment that mimics preferred habitat for deer, the deer population is well beyond its natural level, particularly in eastern Massachusetts. Research has demonstrated that at high abundance, deer browsing of vegetation can prevent forest regrowth, reduce habitat resiliency and species diversity, and eliminate certain plant and rare species, and causes damage to agricultural crops, gardens and landscaping.

The Trustees has long been a statewide leader in safely implementing controlled hunting programs for more than 20 years on many Trustees properties. The program was carefully designed to ensure safety and The Trustees’ decision to allow or prohibit hunting is evaluated on a property-by-property basis, guided by state laws and The Trustees’ Hunting Policy which addresses a variety of factors, including: public safety; wishes of the property donor; resource protection; human and deer health; visitor experience; and local regulations.

Based on recent spotlight surveys, vegetation surveys, regular observations by staff and complaints from adjacent property owners, we know the deer population at World’s End has grown significantly in recent years. The management plan for World’s End completed in 2002 states: “ Even deer, which typically do well in suburban environments, appear to be rare with no resident population” Fifteen years later, surveys conducted by The Trustees’ ecology and property staff indicate the deer population is well in excess of the desired density goals set by both the Massachusetts Division of Fish and Wildlife and The Trustees. Deer densities in excess of 12-18 per square mile degrade habitat and wildlife sustainability. Recent surveys conducted by the Trustees have documented between 16-40 deer at World’s End Reservation in Hingham, well above the 6-9 deer limit in this half-square-mile property.  Even using the lowest survey numbers (16 deer), the current population is double the property’s target density. Given the ecological, scenic and recreational significance of World’s End, The Trustees goal is to maintain target densities of the local deer herd through an annual controlled hunt.

This hunt has been two years in the making because The Trustees recognizes that a proactive and ongoing relationship with our surrounding community is important for a deer management plan. The Trustees has sought advice and council from key stakeholders such as the local police chief, the conservation agent, neighbors, property committee members, MassWildlife, and the general public prior to conducting a deer management program. We feel this represents best management practices and responsible stewardship of World’s End.

Q: What is a controlled hunt?
A: As opposed to an open season hunt on permissible land, a controlled hunt is one that limits the number of hunters allowed, the numbers of days when hunting can occur, and sets additional rules and regulations other than state hunting regulations. These hunts take place during the regular hunting seasons and typically occur to manage wildlife populations, and the type and quantity of game animal that can be harvested is restricted. These hunts generally occur on land, where land managers have identified parameters that present a need regulate how hunting occurs. Controlled hunts are implemented by The Trustees to manage wildlife populations (specifically deer) for resource protection, we vet each hunter, require that each hunter to passes a shooting proficiency test, signs a written permission form and provides contact information and hunting licenses. We limit the number of hunters who have permission on a property, the game that can be harvested, and require hunters to follow additional rules and regulations, such as where, when and how they can hunt. Hunters are required to remain in consistent communication throughout the season and those that participate safely and responsibly are given permission the following year, those that do not, are removed from the program.

Q: Why are we initiating a hunt at World’s End?
A: Desired density goals for White Tail deer are 12-18 per square mile as set by the Massachusetts Division of Fisheries and Wildlife, which The Trustees uses as a guideline for deer management. Recent surveys conducted by the Trustees have documented between 16-40 deer at World’s End Reservation in Hingham. World’s End measures less than ½ square mile.  Even using the lowest survey numbers, the current population is at least double the property’s target density. The Trustees have also implemented vegetation monitoring that suggests nearly all plant species monitored were unable to put on new growth this year as a result of deer browse.  Given the ecological, scenic and recreational significance of World’s End, the Trustees goal is to maintain the local deer herd at target densities through an annual controlled hunt in accordance with the Trustees policy on deer hunting.

Q: How are the Trustees proposing to control deer at World’s End?
A: The Trustees plan to close World’s End for two weekdays (Dec. 2 and Dec. 9) during shotgun hunting season to implement a controlled shotgun hunt. Due to World’s End’s separation from the mainland, shotgun hunting can be implemented safely since entry points can be closed to the public and the majority of the property falls outside of state safety setbacks (150ft from a roadway and 500ft from a dwelling). 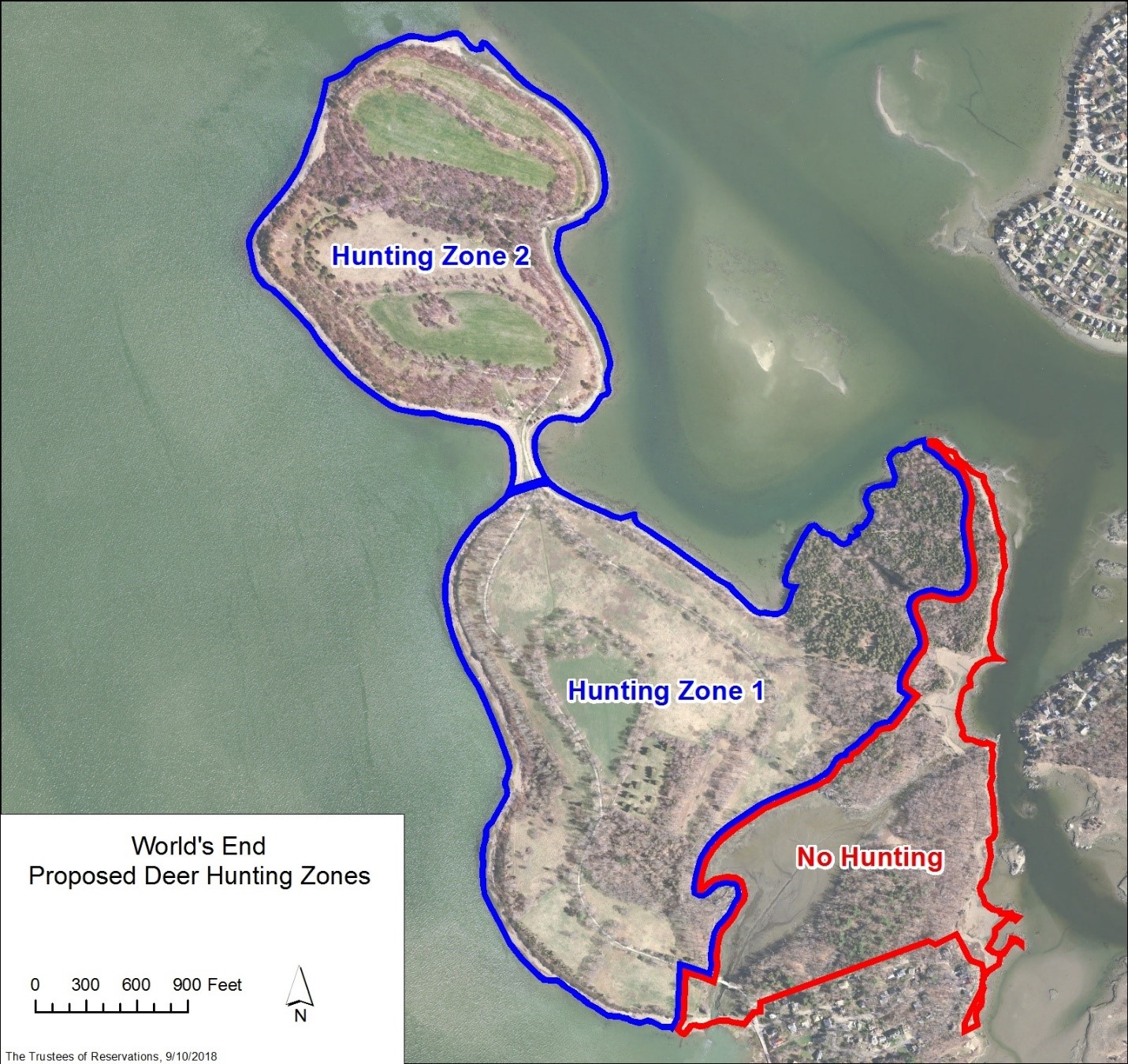 Q: Did you consider specific hunting regulations in Hingham?
A: Yes, The Trustees has consulted with the Police Department, conservation agent and has notified the Select Board members of our plans to conduct the hunt. We are operating within the town’s bylaws and ordinances.

Q: Have the Trustees communicated with town residents?
A: Yes, The Trustees has been in communication with community residents in the vicinity of Worlds End. The Trustees have held a virtual meeting in late-October 2020 to discuss why and how we are implementing the hunt.

Q: What is the Trustees policy on hunting?
A: The decision to allow or prohibit hunting is evaluated on a property-by-property basis guided by the Trustees Hunting Policy which addresses a variety of factors – public safety, donors wishes, resource protection, human health, visitor experience and state and local regulations. Hunting is only allowed if it meets strict standards set forth under this policy. The hunting policy is available on our website at https://thetrustees.org/content/hunting-on-trustees-properties/.

Q: What are the reasons for hunting on Trustees properties?
A: One of the primary reasons for hunting at Trustees properties is to help reduce and control the deer population and improve the overall habitat health of our properties and surrounding areas. With few natural predators in the region and urban environments that mimic the preferred habitat for deer, the deer population in eastern in Massachusetts is well beyond its natural level. It is well-documented that an overabundance of deer negatively impacts habitat and wildlife health. The Trustees consider hunting part of a program of best management practices for maintaining healthy deer populations at our properties.

Q: How do I know if a Trustees property is open to hunting?
A: Of our 120 properties, 32 properties are open to controlled deer hunting by permission only. To find out if a specific property is open to hunting, please visit the website at www.thetrustees.org and search for a particular reservation. Details about hunting regulations are on each reservation’s devoted page under “Regulations & Advisories.”