marble and lead
Museum Purchase, The Frederick P. Walkey Fund, a gift of the Stephen and Sybil Stone Foundation, and funded by Museum supporters at the 2012 deCordova Annual Benefit 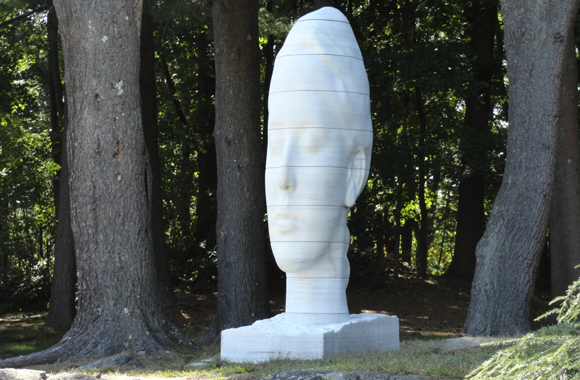 Figurative sculptor Jaume Plensa is an internationally acclaimed public artist. He is perhaps most associated with The Crown Fountain (2004) in Chicago’s Millennium Park, which is a modern twist on an ancient civic symbol. The fountain takes the form of two, fifty-foot glass towers that display video portraits of windy city citizens who playfully spout water down onto the plaza below. Plensa made a similar civic splash this past summer with Echo (2011) – a forty-four foot tall polyester resin head in New York’s Madison Square Park.

Plensa’s figural sculptures invite rumination on the relationship between language and form, and the connections between a person’s interior thoughts and his/her physical presence in the world. His elongated portraits of everyday people are at once specific, anonymous, universal, and tranquil. Humming (2011), a portrait of a young female rendered in a calm, meditative state, embodies all of these characteristics and more.

To create this sculpture, Plensa begins with a photograph, which he scans into a computer and manipulates on screen. With the help of rapid prototyping technologies, the artist prints out a three dimensional model of his desired form. He then modifies that object by hand, re-scans it, and repeats this process until he’s satisfied with the final model. Using the digital file as a guide, Plensa finally carves into the marble with a set of computer-aided sculpting tools, creating a sculpture in sections that is separated by a thin piece of lead when assembled.

In line with his practice, Humming places a very different kind of figural subject at the center of a sculptural tradition known for memorializing historical heroes on horseback. His elegant, abstracted heads harken back to the Olmec monuments or those found on Easter Island, but are very much twenty-first century creations. Plensa’s sculptures encourage reconciliation between a figure’s contemplative, psychological state and the environment in which it is displayed. They speak to the beauty of our individual minds, inside and out, and are evidence of a powerful revisioning of the figure in contemporary sculpture.

Listen to Jaume Plensa talk about the sculpture.

marble and lead
Museum Purchase, The Frederick P. Walkey Fund, a gift of the Stephen and Sybil Stone Foundation, and funded by Museum supporters at the 2012 deCordova Annual Benefit