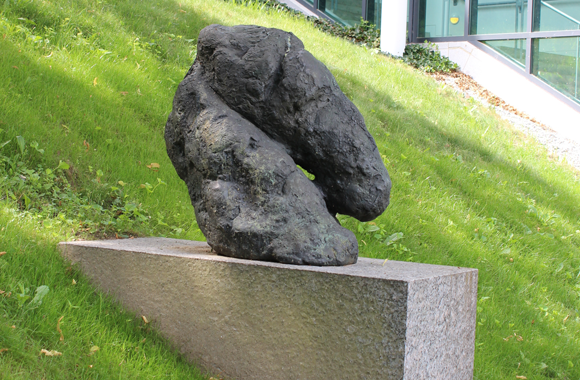 In 1960s England, William Tucker was part of a group of young sculptors—under the leadership of Anthony Caro—who made work that radically broke with tradition: their sculpture was abstract, constructed in modern industrial materials such as steel, and placed directly on the ground. Their practice was in contrast to traditional bronzes on pedestals. Tucker’s early forms were geometric, minimal shapes that incorporated large areas of negative space. His work evolved as he explored solid compositions cast from plaster and concrete. His increasing concern with nature and the human form led him to use more malleable materials and organic compositions. Tucker describes his later works as having “a more human presence, while not being figurative in a familiar sense.”

Horse X belongs to his sculptural series of horse heads produced since the 1980s. Tucker credits the ancient Chinese equestrian sculptures at the Museum of Fine Arts, Boston, as his inspiration, and Horse X mimics their green patina. The organic quality of the sculpture resembles natural rock formations and contrasts with the hard edges of his earlier geometric works. Although the horse’s head is abstracted, the title of the work helps to reveal the sculpture’s figural qualities.

Born in Cairo, Egypt to English parents, Tucker studied at Oxford University, England, and St. Martin’s School of Art, London. He moved to the United States in the late 1970s for a teaching position at Columbia University, NY. He has exhibited his artwork nationally and internationally at the Venice Biennale, Venice, Italy; Serpentine Gallery, London, UK; Tate Gallery, London, UK, and Bethel College, St. Paul, MN. His work is in the collection of the Guggenheim Museum, NY; High Museum of Art, Atlanta, GA; National Gallery of Victoria, Melbourne, Australia; and Storm King Art Center, Mountainville, NY. Tucker received many awards, including a Guggenheim Fellowship, National Endowment for the Arts Fellowship, the Rodin-Moore Memorial Prize, and the International Sculpture Center’s Lifetime Achievement in Contemporary Sculpture Award. Tucker also is a writer and published the influential book The Language of Sculpture, Thames & Hudson, London, 1974.