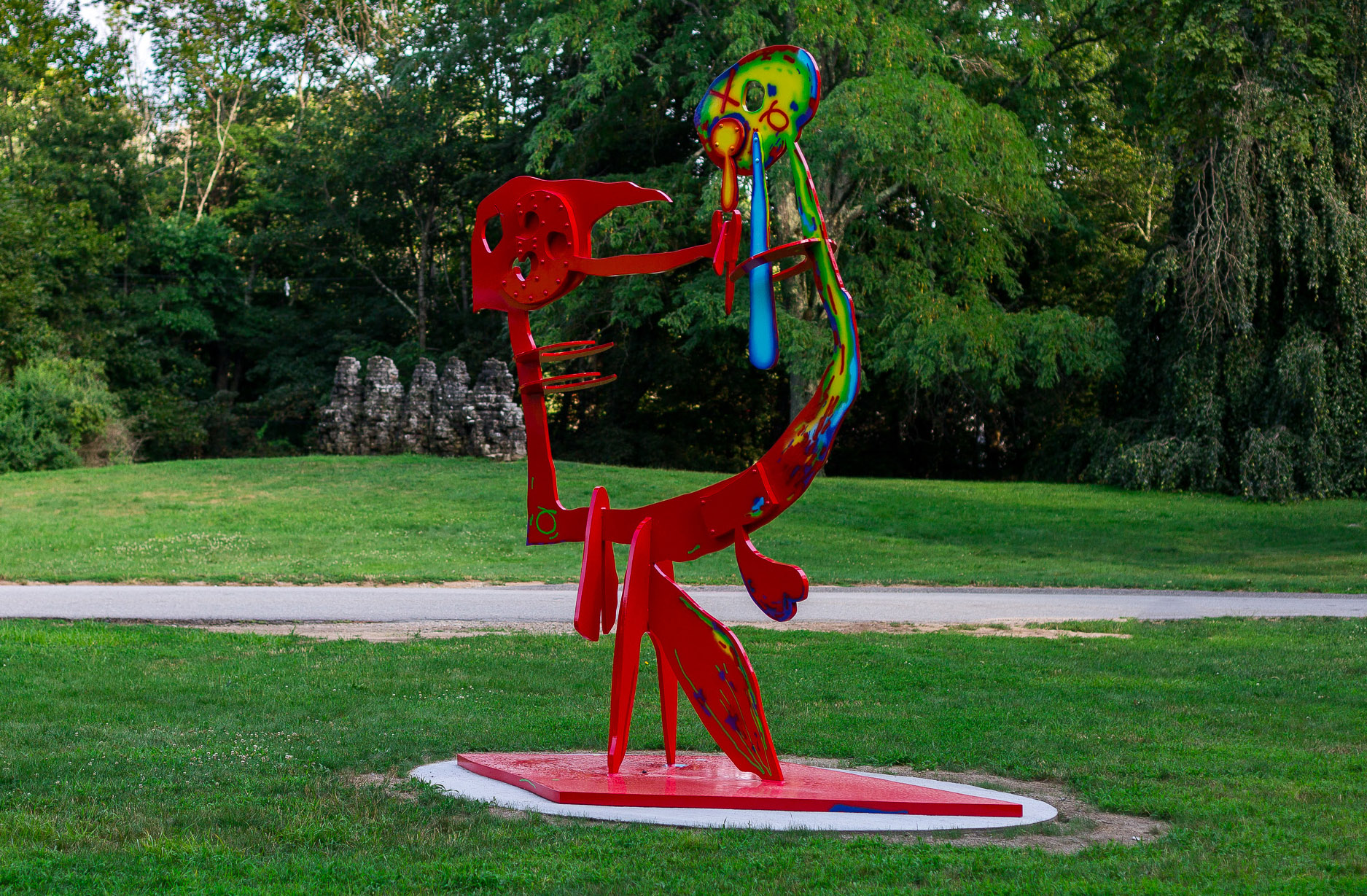 HOMEWRECKER is part of Aaron Curry: Grove, an exhibition of three monumental sculptures that add an otherworldly presence to deCordova’s bucolic front lawn. Both abstract and anthropomorphic, the sculptures feel improvisational, with irregular contours and air-brushed, neon-streaked surfaces. Curry’s bold and whimsical style updates the work of iconic twentieth-century artists, such as Alexander Calder and David Smith, with contemporary allusions to science fiction, cartoons, and stagecraft. The tallest sculpture, UGLY MESS evokes a dejected figure with two large tears leaking from its cut-out eyes. BLUBAT resembles a child’s stick figure drawing with wings—or a cape—hanging from its outstretched arms.

These works were originally commissioned for a solo exhibition of fourteen sculptures titled Melt To Earth (2013) installed in the plaza of Lincoln Center for the Performing Arts, New York. Curry designed the sculptures with theatrical scenery, or “flats,” in mind, constructing them from sheets of aluminum so thin that elements of the structures seem to appear or disappear in space according to the viewer’s vantage point. Citing the set designs of Pablo Picasso and Henri Matisse as inspiration, Curry says his “sculptures echo what occurs on stage and can be understood simultaneously as characters and as being the setting for some event.”

Trained as a painter and a sculptor, Curry frequently transitions between two and three dimensions. Often positioned on the floor or extending off the wall, his hyper-colored canvases possess a physical dimension, while his planar sculptures appear to be drawn in space. When describing his process for creating the plywood maquettes for his sculptures, Curry says: “I try to cut as if I’m painting. A lot is chopped up, bad cuts.” While studying at the School of the Art Institute of Chicago, he was introduced to work of the Chicago Imagists, a group of artists who became active in the 1960s. Curry’s canvases bear traces of the surreal, playful, and sometimes grotesque imagery of Imagists like Peter Saul and Karl Wirsum.

Curry was born in 1972 in San Antonio, Texas. He earned a BFA in 2002 from the School of the Art Institute of Chicago, Illinois, and an MFA in 2005 from the Art Center College of Design, Pasadena, California, where he studied under Mike Kelley and Jim Shaw. In 2010, he received the Guna S. Mundheim Fellowship in the Visual Arts at the American Academy in Berlin. Curry has had solo exhibitions at the UCLA Hammer Museum in Los Angeles, California, and the High Museum of Art, Atlanta, Georgia. He currently lives and works in Los Angeles, California.