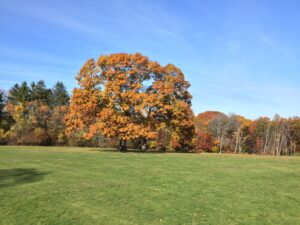 In 1743, he built for his family a modest country estate on Milton Hill to escape the city. Hutchinson commissioned Sir Francis Bernard to design his house and gardens. All that remains of the estate today is the field and a “ha-ha” that formed the western boundary of the formal garden; located next to St. Michael’s Church on Randolph Street in Milton, the “ha-ha” is now on the National Register of Historic Places.

In 1774, shortly after the Boston Tea Party, Governor Hutchinson went into exile in England where he died in 1780. Following his departure from Massachusetts, his property and effects were sold at auction. Today his writing desk can be seen at the Milton Public Library. The house was later owned by James Warren whose wife was Mercy Otis Warren, a brave polemist whose satiric sketches and accounts of the Revolutionary War were circulated throughout the colonies. The house was razed in 1946.