fabricated aluminum painted black
Museum Purchase with funds provided by the Judith Rothschild Foundation, and Gift of the Dorothy Dehner Foundation for the Visual Arts, Inc. 2003.4 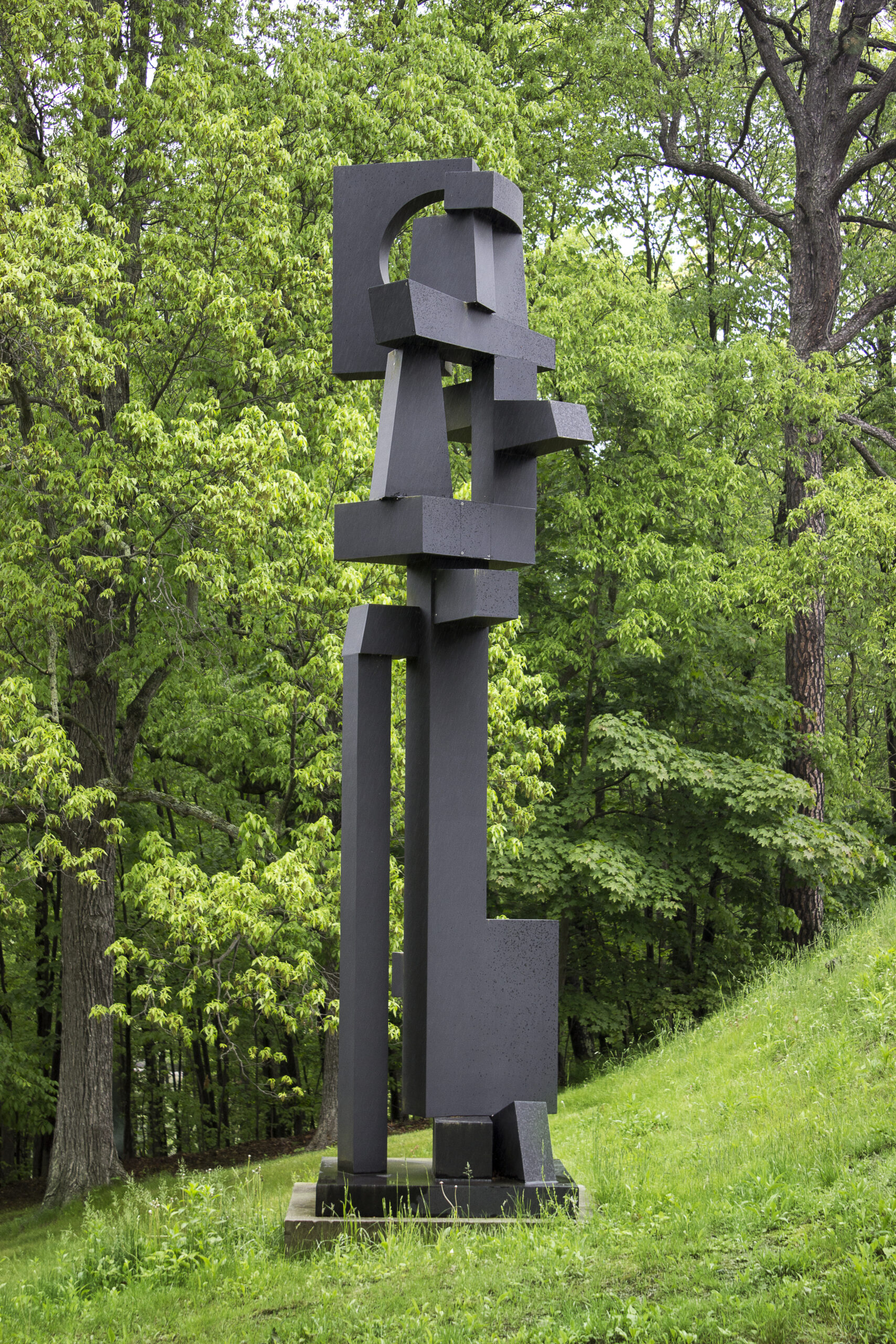 Dorothy Dehner was an American artist known for her landscape paintings and towering abstract sculptures. During her early twenties, Dehner studied modern dance, theater, piano, and wrote poetry. After a year of traveling independently in Europe and learning about Cubism and Constructivism, she enrolled in the Art Students League in New York. While married to sculptor David Smith, Dehner put her artistic pursuits largely on hold, though she continued to paint in her spare time. After the couple separated in 1951, she turned to sculpture. Her first three-dimensional experiments were carved in wax and then cast in bronze, though she later expanded her portfolio to include wooden and steel constructions. Diverse in content and style, Dehner’s work drew on her experiences and travels, and she continued to work into her nineties. In particular, she fused abstract Constructivist aesthetics and principles with her observations of traditional figurative Greek sculpture, which fostered her interest in the mythological and monumental. She wanted “to express my feelings and thoughts, and I want to distill them so they will be pristine and clear and come back to me … with a new life they never had when inside me.” In this way, each of Dehner’s sculptures can be interpreted as pages in a diary, with each block relating to a memory that narrates significant moments in her life.

Fortissimo is a 19-foot tall structure comprised of multiple irregularly-shaped blocks. Though geometric and industrial, the sculpture, with its stacking of various cast elements, mimics a totem pole. During the 1970s, the totem pole was a recurring motif in Dehner’s work, often consisting of jagged elements reminiscent of ancient warriors and the severe silhouettes created by their armor. Through this vertical form, she also experimented with negative space, the area between and around parts of the structures, and how it could be manipulated to create additional forms. For instance, Dehner removed a semicircular section from one of Fortissimo’s upper blocks, which, like a window into a private realm, both reveals and frames a fragment of the surrounding landscape. Fortissimo (which means strong) was based on a small bronze Dehner made in the 1970s entitled Fist. Returning to the design twenty years later in 1993, she reworked it on a monumental scale and used painted black aluminum. The result is a dynamic interplay of space and mass that reflects on her later-life interest in the concept of a personal journey.

Born in Cleveland, Ohio in 1901, Dehner grew up under the care of her two aunts, whose interests in foreign culture and the arts nurtured her early creative pursuits. After her divorce from David Smith, Dehner studied engraving at Stanley William Hayter’s Atelier 17, where she met sculptors Louise Nevelson and David Slivka. For the rest of her life, Dehner committed to creating sculpture. In 1983, the Women’s Caucus awarded her outstanding achievement in the visual arts. Dehner’s work has been featured in numerous exhibitions, including fifty solo shows that took place in the United States between 1948 and 1994. Notable examples include her first solo exhibition at Skidmore College in 1948 and major retrospectives at the Jewish Museum, NY, in 1965, City University of New York Gallery in 1991, the Katonah Museum of Art, NY, in 1993, and the Cleveland Museum of Art in 1995.

Listen to Joan Marter and Paula Wizotski, scholars, talk about Dehner and her work.

fabricated aluminum painted black
Museum Purchase with funds provided by the Judith Rothschild Foundation, and Gift of the Dorothy Dehner Foundation for the Visual Arts, Inc. 2003.4