Figure from the Sea 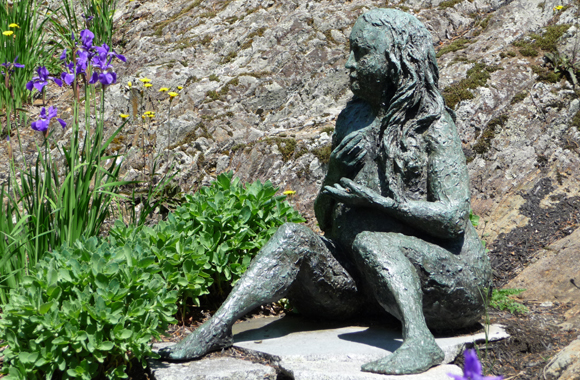 Throughout the second half of the twentieth century, figurative sculptor Elliot Offner fused elements of American naturalism and folk art to create expressive renditions of the human form and American wildlife. His work demonstrates the artist’s pronounced study of art of the past, particularly sculpture from the Romanesque and Gothic periods, as well as a deep understanding of natural forms. Offner worked with carved wood, clay, plaster, and bronze to generate representations of the body in action. He often utilized a “direct build” method, combining modeling and carving in a hybridized approach. Specifically, the artist first built up the form in plaster, pushing and lifting its malleable surface with a small spatula before letting it dry and then carving into it. He repeated this addition and reduction several times, imbuing the work with traces of its process. With heavily layered surfaces, the bronzes cast from the plaster are replete with waves, lines, and marks that indicate the maker’s hand, giving them a depth, richness, and tactility.

Offner created Figure from the Sea as a young sculptor, when his work focused on his personal history as a first generation European Jewish immigrant. The figure is one of many renderings of women from the Old Testament that Offner explored in the early 1960s. He calls these heroic, large-proportioned female bodies “tributes to the Central European women who populated my youth,” a reflection on the matriarchal roles that his mother and grandmother had in his childhood. Amidst deCordova’s green landscape, Figure from the Sea appears above undulating grasses that mirror the long, distinct strands of hair rippling down the figure’s back. The sculpture’s expressively modeled surface and rich patina recall droplets on skin, alluding to her recent emergence from water. Her crouched position and bent arms suggest a body in motion, as she is caught in suspension between sea and land, wet and dry, movement and stillness.

Born and raised in Brooklyn, NY, Offner attended Cooper Union and received both a BFA and MFA from Yale University. He spent much of his adult life in Northampton, MA, as he was on the faculty of Smith College for almost fifty years. Offner was a Visiting Artist at Brandeis University, Yale University, The Royal College of Art in London, and various colleges at Cambridge University in England. In 2003, Offner was named Master Wildlife Artist by the Leigh Yawkey Woodson Art Museum in Wausau, WI. His art is in many public and private collections, including the Hirshhorn Museum, DC; the Brooklyn Museum and Sculpture Garden, NY; the Huntington Sculpture Garden, SC; the Museum of Fine Arts in Springfield, MA; and Brookgreen Gardens in Pawleys Island, SC.