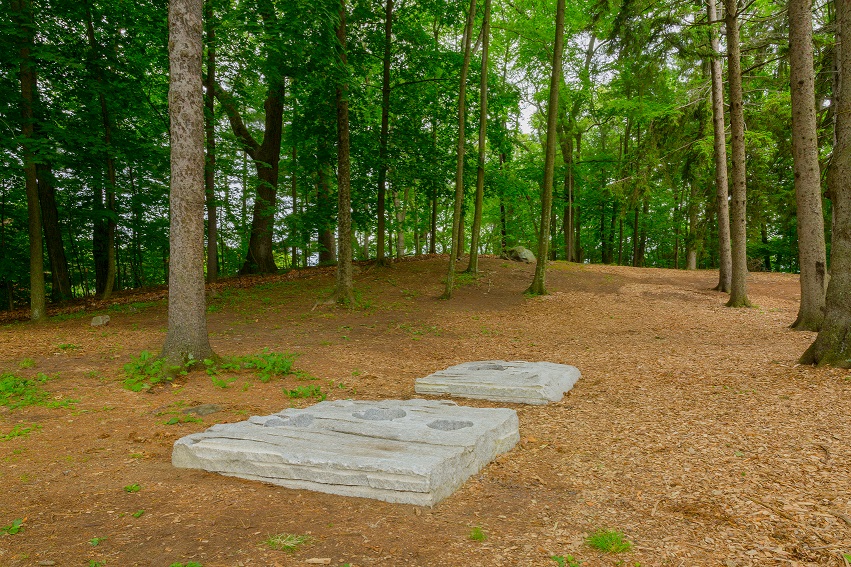 For Ferma (5), Esther Kläs cut two planar forms from a block of granite and placed them along the forested-edge of deCordova’s Sculpture Park. Resting on the earth and largely hidden from view, Ferma (5) is meant to be discovered, evoking associations with architectural ruins and stone-laid pathways. The coarse surfaces of the low-lying plinths are punctured with drilled holes and scored with the straight channels that are the product of their quarrying, resulting in richly textured forms that are activated by the natural interplay of light and shadow. Kläs created Ferma (5) for the sixteenth iteration of deCordova’s PLATFORM series, a program which invites artists to create site-specific sculptures that engage with the Sculpture Park’s unique landscape.

Ferma (5) relates to previous sculptures by Kläs that suggest weathered monoliths or ancient architectural remnants. Kläs’s three-dimensional work is non-figurative, but often evokes the body, as she builds her sculptures to the scale of her own six-foot frame. Although she conceives her work individually, she often places them in small groupings in order to activate relationships among the forms within a given space.

Esther Kläs was born in 1981 in Mainz, Germany. She earned her MFA from Hunter College in New York City, where she currently lives and works. Kläs’s work has been presented in such institutions as Kunsthalle Bielefeld, Germany, MoMA PS1, Long Island City, NY; and Marino Marini Museum, Florence, Italy. Her work is featured in deCordova’s exhibition Drawing Redefined: Roni Horn, Esther Kläs, Joëlle Tuerlinckx, Richard Tuttle, and Jorinde Voigt on view from October 3, 2015 through March 20, 2016.