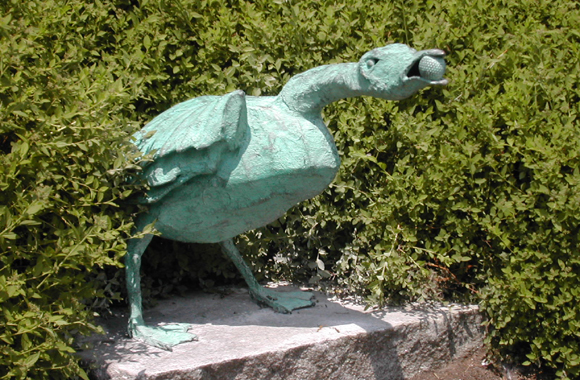 Kitty Wales examines the anatomy and movement of the animals she observes, and creates installation artworks that embody her visual and emotional responses to these living subjects. Wales is particularly interested in feral animals, and her previous projects have included dogs, pigs, and sharks such as those in Pine Sharks, another work by the artist previously shown in deCordova’s Sculpture Park. Although Wales does not label herself an environmental artist, her work addresses the impact of human beings on nature. Combining natural and human-made found objects, such as washing machine parts, old sweaters, wood, or mismatched silverware, Wales constructs environments inhabited by recycled creatures salvaged from domestic debris.

Feral Goose is one of five bronze geese Wales cast for deCordova’s 1995 exhibition, Strokes of Genius: Mini Golf by Artists. This bird seems to confront the viewer in hostile confusion over a golf ball, which it clutches in its beak. In the context of its original exhibition at deCordova, the artwork addressed the ways in which we alter animal habitats through the creation of artificial landscapes such as golf courses. It also played with the idea that feral animals may occupy landscapes developed for human leisure and amusement, and are not sequestered to remote areas far from human reach. The sculpture echoes the message of many of Wales’s installations, asking the viewer to consider more fully the footprint we make on the natural world and the waste we leave behind.

Wales earned a BFA in Sculpture and Art Education from Boston University, and an MFA in Sculpture from the University of Arizona. Her work is in the permanent collections of the Gala Museum, Azerbaijan, and several New England museums, including the Fuller Craft Museum, the Duxbury Art Complex Museum, Auburn Park, and the South Shore Conservatory. She has exhibited across the United States and abroad in Paris, Berlin, and Azerbaijan. Wales teaches sculpture at Boston University and has studios in Wrentham, MA, and Vinalhaven, ME.