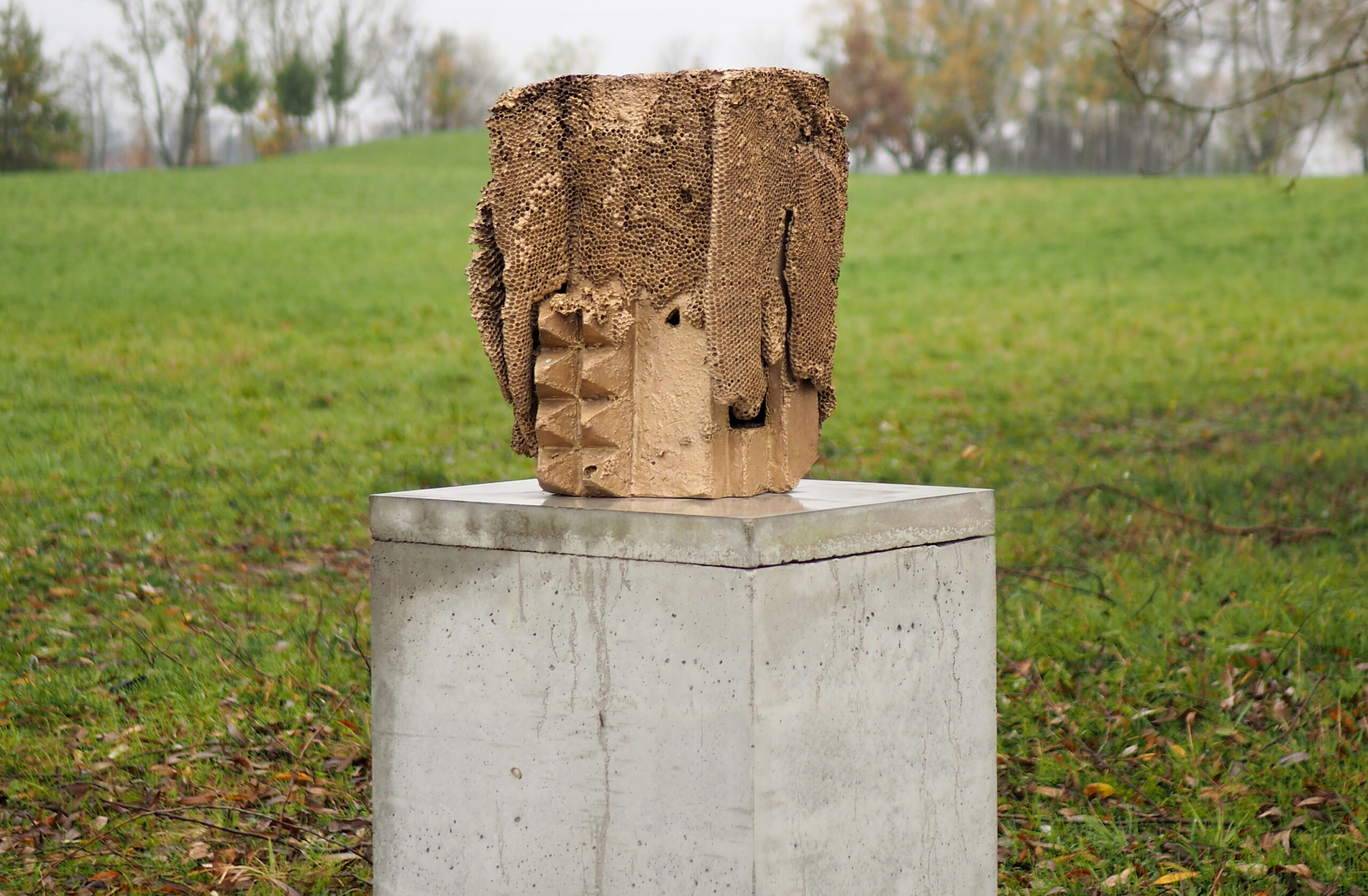 Michael Sailstorfer is a sculptor and conceptual artist, utilizing the space around an object to emphasize the physical traces time and movement leave on things. In this sense, all objects he creates are installations, as they take up physical space and alter their surroundings. The goal of Sailstorfer’s work is to alter how we familiarize objects by rearranging and shifting the meaning of utilitarian materials.

Working with a huge range of different materials and objects, from cars to popcorn machines, there is a playfulness and whimsy with which Sailstorfer changes the objects’ frame of reference to disrupt the everyday. The Brutalist tradition of East German buildings where he works in Berlin is a constant inspiration to Sailstorfer as he takes everyday items and industrial materials from his surroundings, such as concrete, chrome, trees, and tires, to create sculptures devoid of their original functions and meanings. The use of many unorthodox materials enables him to alter the space around the work and engage the viewer in a multitude of sensory experiences. “Often I have used materials of different materiality—solid or ephemeral; amorphous, liquid, olfactory or acoustic. I am interested in the situation; I test it for its space-occupying and changing potential.” By recycling and reconstructing objects, Sailstorfer diverts familiarity into folly to create radical shifts of meaning.

Factories comes from a group of five unique beehive box sculptures exhibited during the International Garden Exhibition, Berlin (2017) in Kienberg Park. Sailstorfer created this work to embody humans’ lack of control over nature. This is evident in the sculptural process as Sailstorfer added bees to the concrete beehive boxes who built up honeycomb around a minimalist sculpture inside. In doing so, the bees play the role of “factory workers” as they complete and transform the sculpture. The finished sculpture is then cast in bronze, similar to the golden-yellow color of the honey combs made by the bees, and set upon the concrete beehive, which functions as a pedestal. Within the construction process, Sailstorfer portrays the link between the ingenuity and unpredictability of nature and human creativity.

Sailstorfer studied at the Academy of Fine Arts in Munich, Germany (1999 – 2005) and Goldsmiths College in London, England (2003-2004). He has had solo exhibitions at König Galerie in Berlin, Contemporary Arts Center in Cincinnati, Rochester Art Center, and Modern Art Oxford among others. His work has been included in group exhibitions such as Riga International Biennial of Contemporary Art (2018) in Latvia, Folkestone Triennale (2014) in England, The Quick and the Dead (2009) at the Walker Art Center in Minneapolis, and more. Sailstorfer’s work is in institutional collections including Walker Art Center (Minneapolis, US), Centre Georges Pmpidou (Paris, FR), Museum Kurhaus Kleve (Kleve, DE), S.M.A.K—Municipal Museum of Contemporary Art (Gent, DE), and many others. Sailstorfer was awarded the Dena Foundation Art Prize for Contemporary Art in Paris in 2002 and was the prize-winner of “Vattenfall Contemporary” in 2012 for his developments in contemporary sculpture.