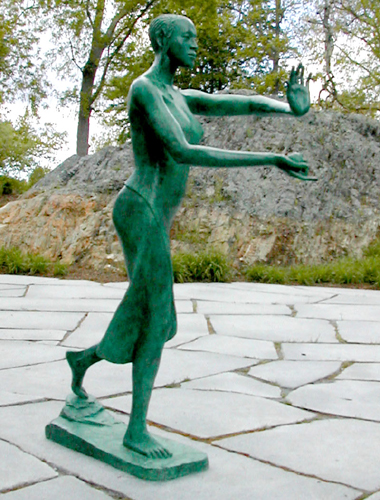 Through sculpture, Pineda explores themes of nature, creation, and womanhood. Her most prominent body of work represents empowered female subjects in movement or as mothers. Practicing in the mid-to late- twentieth century, she was committed to rendering the female form naturalistically. While sculpture was primarily a male dominated field at the time, she became prominent as a Boston-area artist. In addition to three-dimensional artworks, Pineda also created and exhibited drawings, which were mostly studies for her figural sculptures.

DeCordova’s Eve Celebrant, part of a series of the same title, is a depiction of the powerful and generous Evewith her arm extended offering a pomegranate—a symbol of knowledge and prosperity. The sculpture’s details, such as the features of her face, the braids in her hair, the garment clinging to her body, and her outwardly extended limbs, work in harmony. Pineda’s Eve is larger than life, representative of female power and strength. Motion is evoked by the figure’s dance-like gesture, typical of Pineda’s figural sculptures. The artist described herself as a “choreographer instilling a sense of movement in and between her figures,” alluding to the importance of the space around the sculpture, and the position of the viewer. Situated outdoors, the green of the oxidized bronze blends with the Sculpture Park’s flora and fauna, and suggests a relationship between woman and earth.

Born in 1925, Pineda was raised in Evanston, IL. When she moved to Southern California, she attended the Otis Art Institute and the Chinourd School of Art. In the summer of 1942, she studied at the Cranbrook Academy of Art, MI, and that following fall she started at Bennington College, VT. As a result of World War II, Pineda’s time at Bennington was cut short and she moved to New York to work and study at Columbia University, where she met her husband, the sculptor Harold Tovish. They eventually settled in the Boston area, where she taught sculpture at Boston University’s School for the Arts. What about her collections?