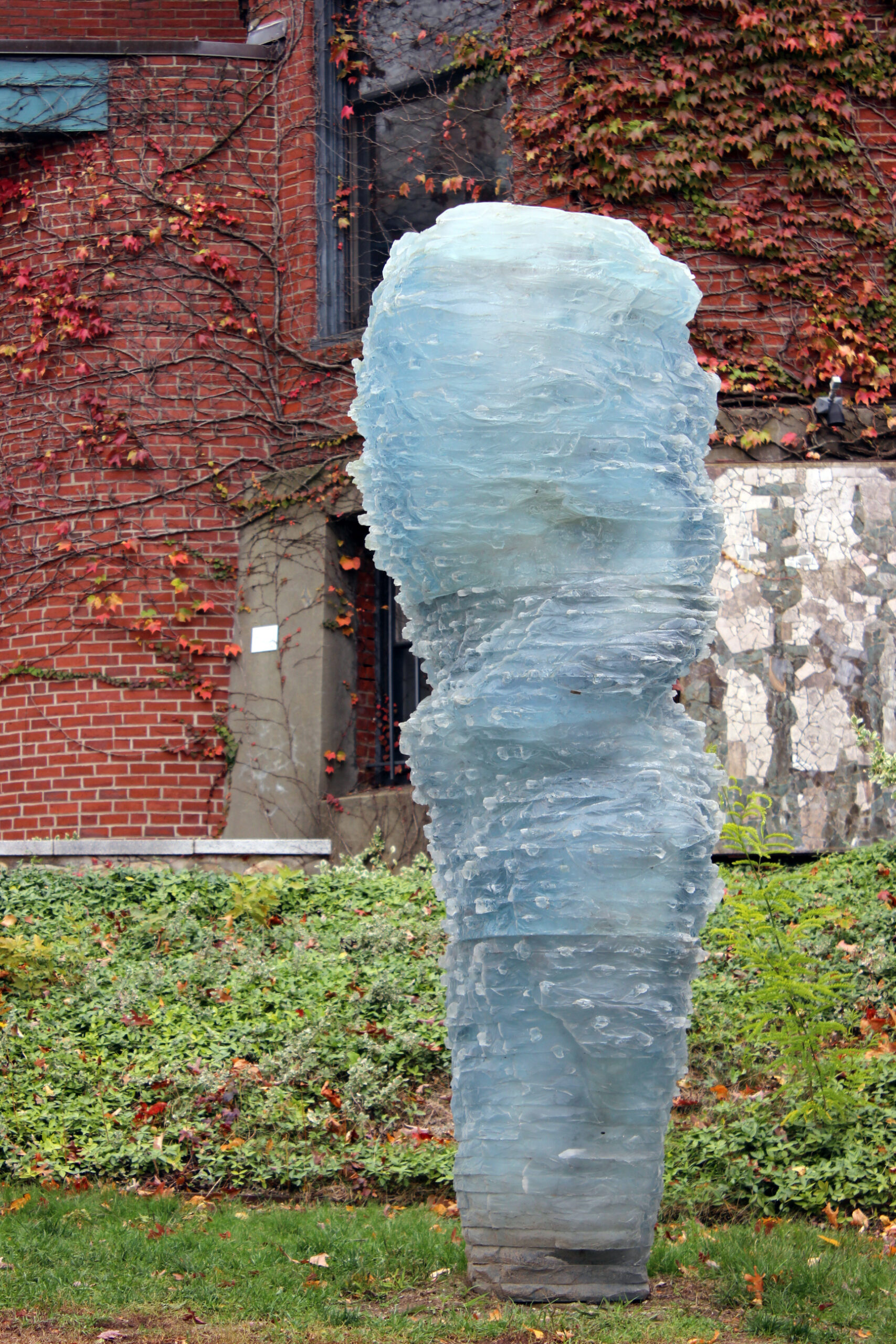 Ursula Von Rydingsvard creates sculptures that are both monumental in scale and intimate in detail. Drawing frequently from her Polish heritage, she constructs large-scale abstract objects in wood of forms that reference domestic artifacts, the human body, or natural patterns of growth and decay. Spoons, bowls, and simple tools are common motifs in her work. In a deviation from her standard materials – soft red cedar lumber and graphite dust – von Rydingsvard’s cast resin Elegantka was commissioned as part of a traveling retrospective, organized by SculptureCenter in New York and presented at deCordova in 2011.

Elegantka is an exact resin cast of a 2008 sculpture, also called Elegantka, made from stacked red cedar two-by-four beams that the artist laboriously carved with a circular saw. This process of both reductive and additive sculpture, of painstaking carving and intuitive building, has defined von Rydingsvard’s career and 30-year practice as an artist.

Elegantka is a solid column that spirals gently as it swells from a narrow base to a generous apex. In the red cedar original, the sculpture appears to be expanding out precariously over its base; cast in resin, however, the piece stands as a unified object that appears to be solid and strong but also light and ephemeral. The surface texture of the sculpture shifts from a gently carved base to a craggy and knotted midsection to gentle undulations that climb around the top of the volume. Electrified and illuminated from the interior, the translucent resin glows at night, giving the substantial sculpture a calm radiance. Elegantka retains the evident human labor of the surface carving, but shimmers with an otherworldly spirit and lightness.

Ursula von Rydingsvard was the recipient of the 2008 Rappaport Prize, an annual art award presented by the deCordova Sculpture Park and Museum through the generosity of the Phyllis & Jerome Lyle Rappaport Foundation. Additionally, von Rydingsvard was the subject of an eighteen year retrospective organized by SculptureCenter and displayed at deCordova in 2011. Born in Deensen, Germany to a Polish family, von Rydingsvard holds a B.A. and an M.A. from the University of Miami, Coral Gables and an M.F.A. from Columbia University. Her work is included in the collections of the Metropolitan Museum of Art, the Museum of Modern Art, the Yale University Art Gallery, and the Whitney Museum of American Art. She lives and works in Brooklyn, New York.