Gift of John Paluska and Cynthia Brown and Museum Purchase with the Beatrice Barrett Fund and funds donated by deCordova Trustees and Overseers in honor of Paul Master-Karnik, 2007.24 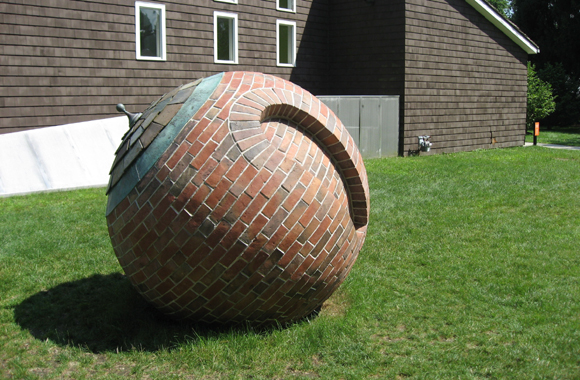 Lars Fisk, "DeCordova Ball," 1999, brick, mortar, slate, and copper, 8 1/2 feet in diameter, Gift of John Paluska and Cynthia Brown and Museum Purchase with The Beatrice H.Barrett Fund and funds donated by DeCordova Trustees and Overseers in honor of Paul Master-Karnik

Since 1995, Lars Fisk has re imagined familiar and common-place objects—from trees to tractors—into spheres. As a basic, accessible form, the sphere provides Fisk with a formal framework to compare vastly disparate elements in our everyday lives. By transforming objects into balls, he encourages viewers to reconsider their surroundings and questions how we might recognize something by seeing it for what it is not. When replicating these objects, Fisk stays true to their original materials. For example, a car transformed into a sphere will be made from real automobile parts while a road-sphere will be made from asphalt. To accomplish this, Fisk has experimented with a wide range of materials, including also steel, glass, ceramics, bark, and rubber. Each of these projects demands separate sets of technical skills and poses new design challenges. Yet, the finished sculptures appear deceptively simple and effortless. By applying the same formula to each of his subjects, Fisk illustrates the extent to which an object’s formal qualities shape its identity.

DeCordova Ball is one in a series of outdoor spheres created by Fisk for deCordova’s exhibition On the Ball: The Sphere in Contemporary Sculpture (January 16—March 14, 1998). It abstracts and highlights the distinct neo-gothic revival architecture of the Museum building. The ball is layered with curved red bricks, lined with a slate roof, and topped with a copper turret—all custom-made by the artist to fit the eight-and-a-half foot sphere. By orienting the ball along a diagonal axis, it appears ready to roll away. Fisk highlights how a “simple, seamless form,” may express “movement and the concept of endlessness and timelessness without a beginning, without an ending.”

Though born in Lebanon, NH, in 1970, Fisk attributes much of his success to his experience of living and working in Burlington, VT. He received a BA from the University of Vermont (UVM) in 1993 and a MFA from Columbia University in 2005. After graduating from UVM, Fisk became the first art director of Seven Days, an independent weekly publication from Vermont that covers everything from politics to art to food. Around the same time, he became involved with Phish, an American rock band founded at the University of Vermont in 1983. Through this, he experimented with performance art and set design, which fostered his interest in installation art. In 2002, Fisk was awarded the third annual Rappaport Prize, an award administered by deCordova to an artist in recognition of his or her significant achievement and creative potential. His work has been featured at museums and sculpture parks across New England and New York, including Socrates Sculpture Park, and MoMA PS1. Most recently, he held a solo exhibition at the Marlborough Chelsea gallery in New York City titled “Mr. Softee” (2016), which featured twelve balls intended to represent an entire street as a contained sculptural object. Today, Fisk lives in Brooklyn where he calls four storage containers, stacked two by two, home.

Listen to Lars Fisk and Nick Capasso, former deCordova Senior Curator, talk about the sculpture and turning deCordova into a ball.

Gift of John Paluska and Cynthia Brown and Museum Purchase with the Beatrice Barrett Fund and funds donated by deCordova Trustees and Overseers in honor of Paul Master-Karnik, 2007.24