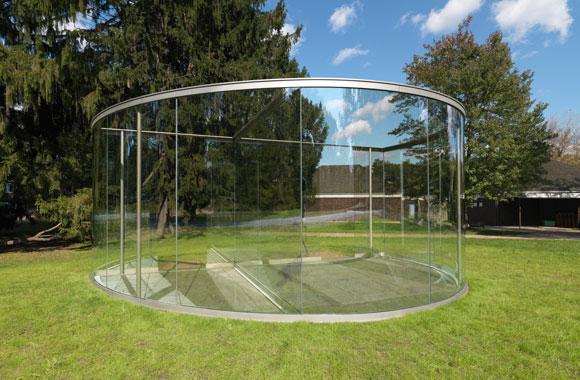 Crazy Spheroid—Two Entrances is a structure in the shape of a half-circle, built of two-way mirrored glass and steel. Visitors standing within or outside of this sculpture observe contorted reflections of themselves and the surrounding Park grounds, and become aware of their own acts of looking. Based on his interest in architecture and its psychological effects, Dan Graham began creating these “pavilions”, as he calls them, in the 1970s. He notes that in all of his art, “geometric forms inhabited and activated by the presence of the viewer, [produce] a sense of uneasiness and psychological alienation through a constant play between feelings of inclusion and exclusion.” Graham relates his sculptures to the “pleasure pavilions” built in formal gardens of the seventeenth and eighteenth centuries. The sleek glass and efficient design also signals the anonymous power of corporate architecture.

Graham has had several retrospective exhibitions including a 2009 show that traveled from The Museum of Contemporary Art, Los Angeles, to the Whitney Museum of American Art, New York and the Walker Arts Center, Minneapolis. During his fifty-year career he has exhibited at major international venues including the Stedelijk Museum, Amsterdam; Chiba City Museum of Art, Japan; and Fundação de Serralves, Porto, Portugal. In 2014 he completed a site-specific installation for the rooftop terrace at the Metropolitan Museum of Art. He has received numerous awards including the American Academy of Arts and Letters, New York (2010), the French Vermeil Medal, Paris (2001), and the Coutts Contemporary Art Foundation Award (1992).