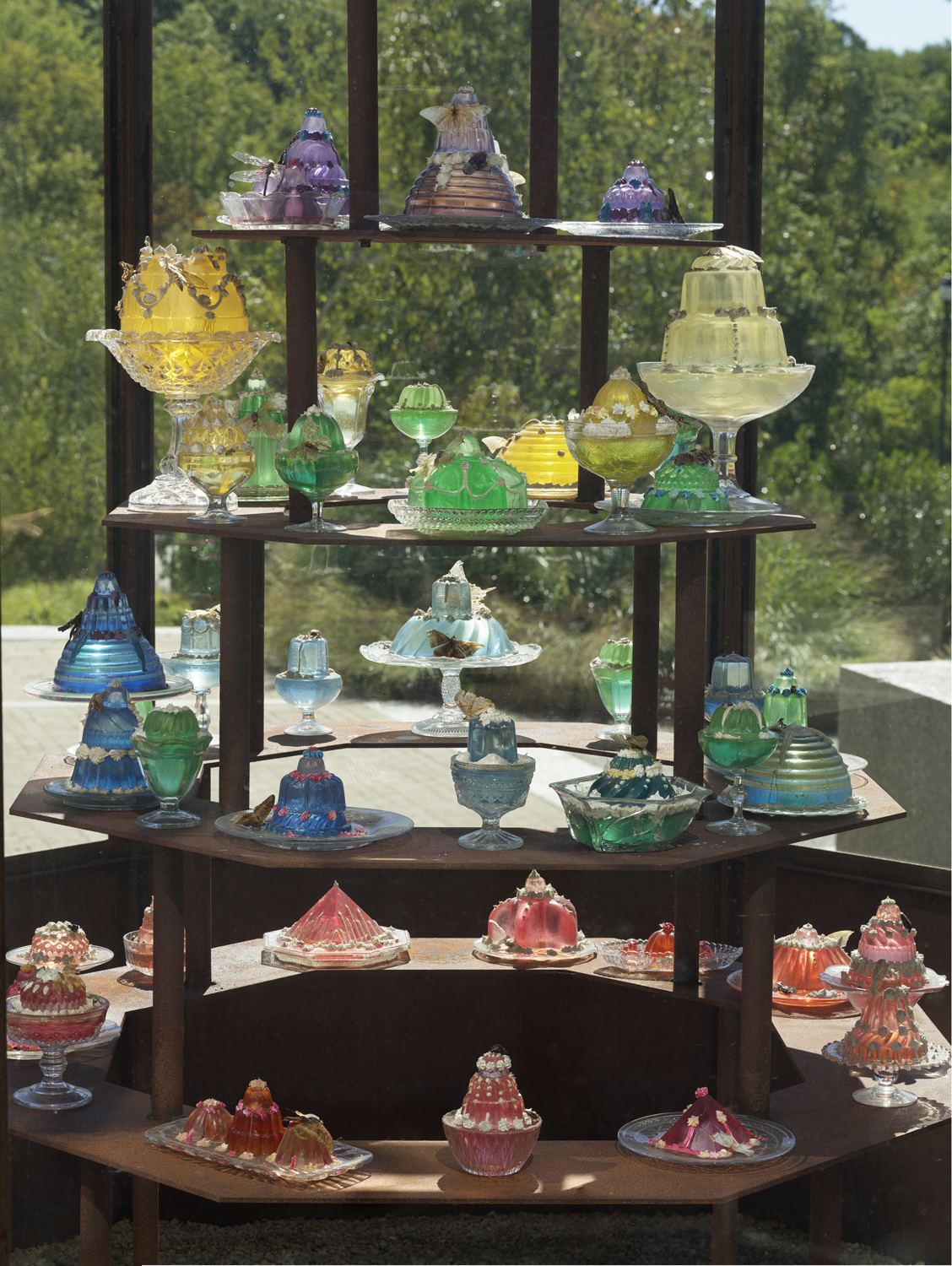 Mark Dion and Dana Sherwood, husband and wife, maintain independent artistic practices and frequently collaborate. Equally concerned with the natural and the man-made, their projects often emphasize the cross-section between these two polarities. In a past collaboration, Encrustations (2012), they imagined a different history for a coastal Californian town. Instead of a near-future of flooded coast lines, this area has been submerged for a century, taking with it cultural artifacts and everyday items. The exhibition featured Dion and Sherwood’s “fantastical archaeology,” hybrid artifacts made with bells, shoes, and hats colonized by coral, algae, and mollusks.

Their separate practices also examine the push and pull between humans and nature. Both Sherwood’s and Dion’s work create artificial settings for, or related to, nature and its many facets. For her literal feasts for beasts, Sherwood constructs and records elaborate dinner parties for scavengers of the night, like ocelots, opossums, and raccoons. Afterwards she creates installations showing the videos, fantastical drawings of herself with the wild animals, and displays of fake food resembling the real meals she plates. Dion takes a much more rigorous approach with his highly detailed but artificial labs and work spaces based on meticulous research into the life and habits of scientists, researchers, naturalists, and others.

Conservatory of Confectionery Curiosities was originally created for the Tuileries in Paris, a sixteenth-century aristocratic garden-turned-public space. Recalling nineteenth-century horticultural hot-houses, the window panes allow visitors to gaze at the colorful desserts but not touch. The octagonal glass structure entraps stacks of Jell-O-like molds covered in insects partaking in the sugary sweets. Through the contained display of this decadent tower, Dion and Sherwood emphasize how humans construct heightened, artificial versions of nature, particularly in cultivated gardens and sculpture parks. The artwork was rebuilt in 2019 for the exhibition “Mark Dion: Follies” at Storm King Art Center, in New York State.

Dion earned a BFA in 1986 and awarded an honorary doctorate in 2002 from the University of Hartford in Connecticut. His most recent solo exhibition was Mark Dion: Follies (2019) at Storm King Sculpture Park in New Windsor, NY. Currently, Dion is co-director of the visual art education and residency program, Mildred’s Lane, in Beach Lake, Pennsylvania.

Sherwood earned a BFA from University of Maine in 2004.  Her work has been shown at the Kennedy Museum of Art, Athens, OH; Dia Foundation at the Hispanic Society of America, NY; and Scaramouche Gallery, NY. Her collaborations with Dion have been shown at Microcosmographia, South London Gallery in England, 2005; Mark Dion: Twenty One Years of Thinking Three Dimensions, Galerie Christian Nagel in Berlin, 2012; and International Orange, For-Site Foundation in San Francisco, 2012.