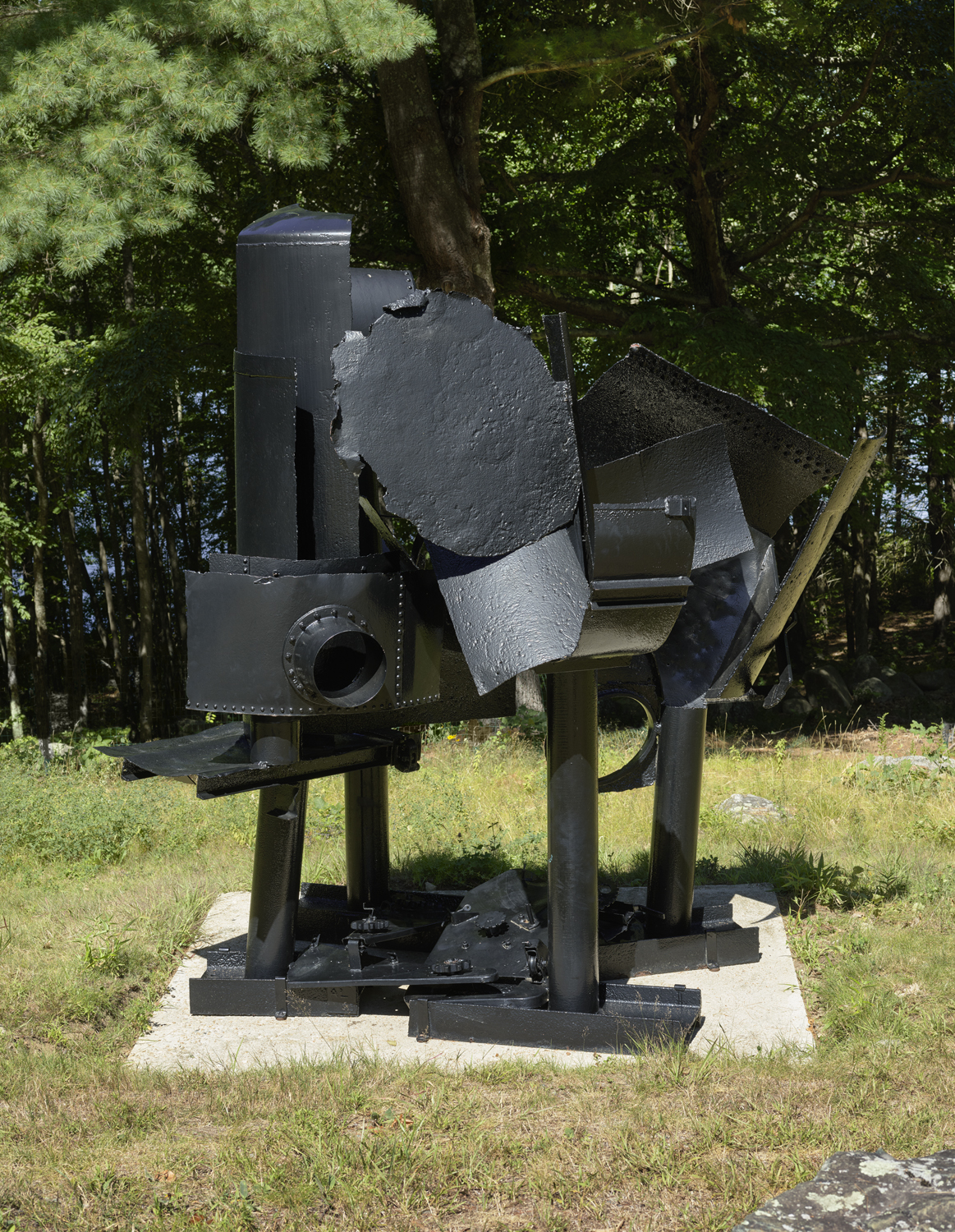 After immigrating to New York City in 1941, the Russian-born magazine editor, publisher, and artist Alexander Liberman established himself as a creator of large-scale steel sculptures. Fascinated by the city’s industrialization, Liberman reimagined the chaotic urban landscape as a series of minimal, geometric structures with monotone color palettes. In these sculptures, Liberman also investigated the concept of improvisation by eschewing preparatory drawings. Working intuitively composing large, often found metal parts, he then welded the pieces together to permanently fix his spontaneous configurations.

Cardinal Points is an early example of Liberman’s large-scale metal constructions and was first featured in deCordova’s seminal Outdoor Sculpture show in 1966. This exhibition marked a milestone in the museum’s history when outdoor sculpture became an important collection focus. For this sculpture, he utilized found metal scraps, including oil barrels. The piece’s semicircular sheets of steel welded to four cylindrical piers likely reference the four chief directions of the compass. When asked about his work, Liberman explained that he uses “cheap materials for economic reasons, but also, there’s an odd, maybe a romantic longing to connect to the earth.” This roughly welded, monochrome early work contrasts to his better-known sleek and brightly colored sculptures. By painting the piece a single color to visually unify its separate parts, Liberman emphasized the importance of geometry and the relationship between the welded shapes.

Liberman was born in Kiev, Russia, in 1912. He and his family later moved to London and then Paris, where he took courses in philosophy and mathematics at the Sorbonne and architecture at L’École des Beaux-Arts. Soon after completing his studies, Liberman began his career in publishing at VU, a weekly French pictorial magazine. By 1962, he had immigrated to New York and was promoted to Editorial Director for all Condé Nast publications in the United States and Europe, a position he held for the next thirty-two years. Though best remembered for his role in revolutionizing fashion editorials, Liberman considered himself an artist first and editor second. His work is in the permanent collections of many major museums, including the Museum of Modern Art, NY; the Whitney Museum of American Art, NY; the Metropolitan Museum, NY; and the Corcoran Gallery of Art, Washington, D.C

Listen to Nick Capasso, curator, and David Collens, director of Storm King Art Center, talk about Liberman and his work.