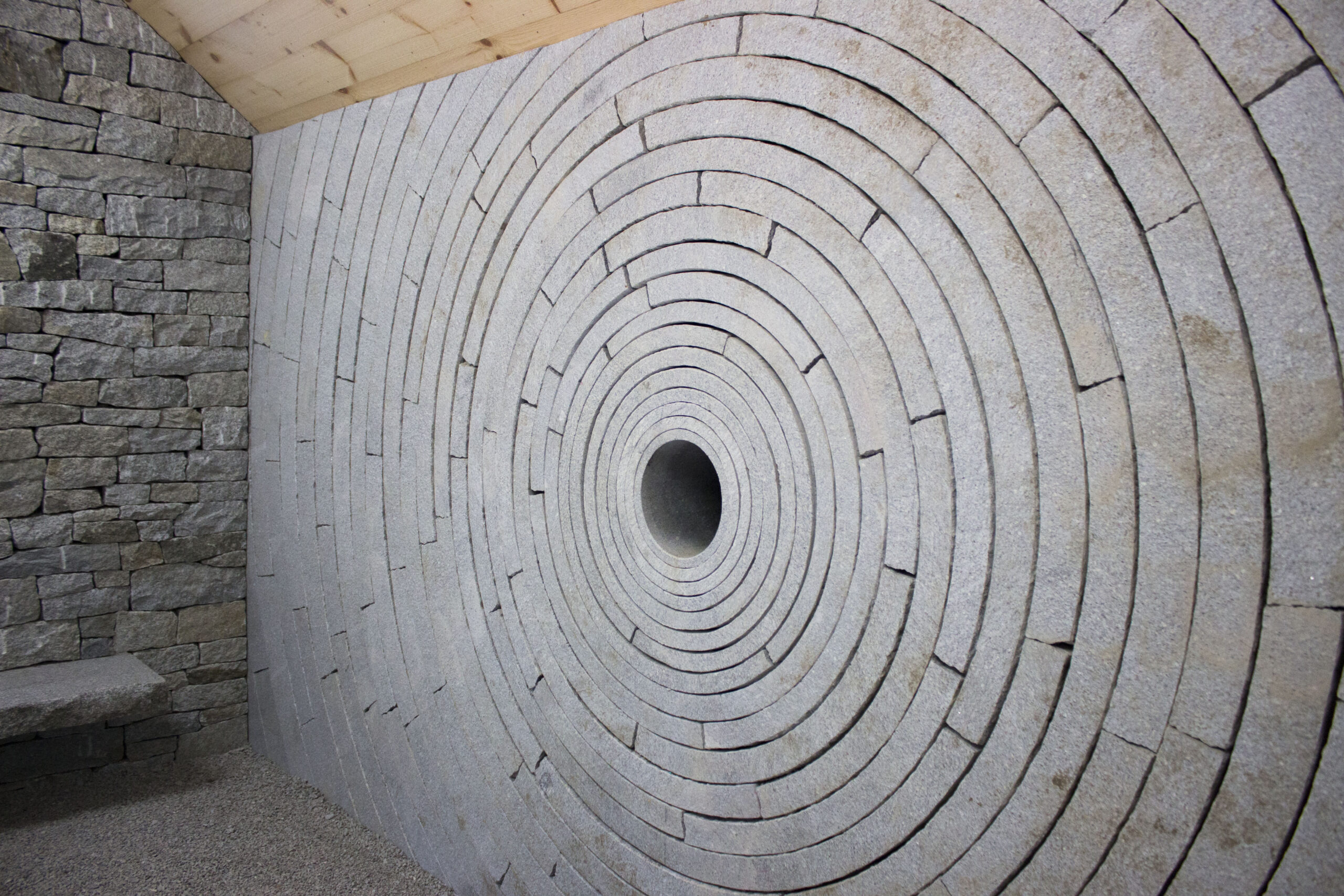 Watershed is a site-specific work designed to interact with deCordova’s unique natural environment. Throughout his career, Goldsworthy has explored the power of water. Its force, energy, and impact respond to the rhythm of weather, and have strong and powerful consequences for the landscape. Watershed is composed of a nine-by-fifteen-foot granite stone structure, partially-embedded in the slope of deCordova’s pond-side hill. The work is built in a vernacular style, echoing stone walls and structures found throughout New England, using local materials and the expert assistance of Goldsworthy’s team of British wallers. On the structure’s interior rear wall, stonework radiates in concentric circles from a drain outlet centered in the wall—a powerful evocation of water’s energy and pattern.

In heavy rain, water runoff from deCordova’s upper parking lot is channeled underground to pour from the outlet in the sculpture’s rear wall, giving form to the normally hidden course of groundwater and allowing visitors to see and hear the work come to life in a multisensory experience. In dry weather the wall nonetheless bears traces of the water that has already passed through it. Like the grottos and water features in the gardens of Renaissance villas, Watershed illustrates water’s impermanence but also its lasting effects, through the constant development of mineral deposits, moss, and other patination.

As a permanent commission by an internationally acclaimed artist, Watershed underscores deCordova’s role as a leading U.S. sculpture park, deepening the discourse on contemporary sculpture in our community and beyond for generations to come.

Major funding for this project is provided by the Nancy Foss Heath & Richard B. Heath Foundation and National Endowment for the Arts, as well as numerous generous private supporters.

In photographs, sculptures, installations, and films spanning a career of four decades, Andy Goldsworthy documents his explorations of the effects of time, the relationship between humans and their natural surroundings, and the beauty in loss and regeneration.

Permanent, site-specific installations by Goldsworthy can be seen at the National Gallery of Art, Washington, D.C.; the de Young Museum, San Francisco; Storm King Art Center, Mountainville, New York; Stanford University, Palo Alto, California; Nelson-Atkins Museum of Art, Kansas City, MO; and the Presidio of San Francisco, among numerous other sites. Major solo exhibitions of Goldsworthy’s work have been presented by Yorkshire Sculpture Park, West Bretton, U.K.; Metropolitan Museum of Art, New York; and Museum of Contemporary Art San Diego, California. In 2022 the Yale Center for British Arts will open a traveling retrospective of Goldsworthy’s work. The artist was born in Cheshire, England in 1956, and is based in southwest Scotland. Goldsworthy is represented by Galerie Lelong & Co.

In 2009, deCordova invited Goldsworthy to propose a permanent outdoor installation at deCordova. The artist’s original proposal, Snow House, evolved with time and discussion into the current Watershed proposal, which like Snow House connects to weather, seasons, and time.