A Mile from Any Neighbor from Walden 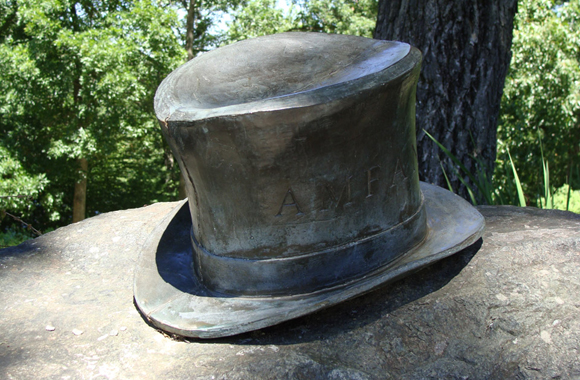 Interested in time, memory, and community, Christopher Frost playfully transforms everyday elements into strongholds of the imagination. As a child, Frost was enamored by tales of exploration, such as Huckleberry Finn, The Last of the Mohicans, and Treasure Island, which inspired him to build forts, traps, and castles using household objects. In the spirit of his younger self, Frost builds sculptures that re-envision and repurpose the ordinary as props in a make-believe world. He says that, “encountering the ordinary (be it hat, fish, or building) through a new perspective can create unexpected, humorous, and often poignant interpretations.” In addition, Frost’s whimsical combinations of cast bronze, wood, concrete, and found materials—from toys to tree branches—question why our diminishing ability to reimagine the mundane as we grow older and invite viewers to view the world through the eyes of a child.

The title of A Mile From Any Neighbor From Walden echoes the opening sentence of Henry David Thoreau’s 1854 Walden, the classic paean to individualism and self-reliance: “When I wrote the following pages…I lived alone, in the woods, a mile from any neighbor, in a house which I had built myself…” Thoreau’s renunciation of the mainstream while living in the woods mirrors Frost’s efforts to step outside of the adult world. Like Thoreau, Frost creates physical and intellectual spaces which allow him to reassess the values of society. We encounter Frost’s top hat high in Alice’s Garden, which overlooks Flint’s Pond. The bronze sculpture references a time when the top hat was an indispensable item of grooming and etiquette and treated as an essential marker of identity. Like many of Frost’s other works, it presents a commonplace item as a playful prop. Out of context, the life-sized hat appears as what it actually is: a cloth accessory. By stripping the hat of its inflated historical importance, Frost both finds humor in and scrutinizes how individuals allow society to shape their values. On the other hand, the sculpture prompts consideration of how certain everyday objects are deemed more important than others.

Frost studied studio art at Bates College, Lewiston, ME, and the Parsons School of Art, New York, before receiving his MFA in sculpture at the School of the Museum of Fine Arts, Boston. In 2000, he was a Vita Brevis Artist-in-Residence at the Institute of Contemporary Art, Boston, and Boston National Historic Park, and in 2009, he was awarded a fellowship by the Massachusetts Cultural Council. His work has been exhibited and collected in museums and art institutions throughout the New England area, including the Boston Sculptors Gallery; the Fuller Craft Museum, Brockton, MA; and The Art Complex Museum, Duxbury, MA.